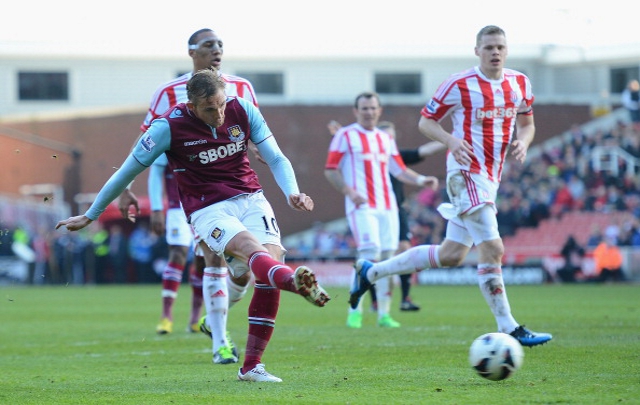 Jack Collison gave West Ham United a 1-0 win at Stoke City on Saturday as the home side sank to only their second defeat at the Britannia Stadium in the Premier League this season.

The Wales international, an early replacement for the injured Matthew Taylor, struck in first-half stoppage time to give West Ham their first away win since November 11.

There were two early blows for West Ham, who lost both Taylor and Joe Cole to injury within the first 11 minutes.

Taylor was unable to continue after being inadvertently kicked in the face by Peter Crouch, while Cole appeared to succumb to a hamstring injury.

Crouch had a volley saved by Jussi Jaaskelainen but West Ham did not appear unduly inconvenienced by their two early departures and saw James Collins flick a header onto the top of the crossbar in the 25th minute.

If anything, the changes gave the visitors new momentum and it was the two substitutes who combined to break the deadlock in the fourth-minute of injury time at the conclusion of the first period.

Ricardo Vaz Te darted towards goal and when an attempted ball to Andy Carroll came back to him, he released Collison with a clever reverse pass that the Welshman stroked into the bottom-left corner.

Stoke striker Cameron Jerome had a penalty appeal turned down early in the second half after going down under a challenge from Joey O’Brien.

At the other end, goalkeeper Asmir Begovic did well to save from Matt Jarvis after Vaz Te teed up the former Wolverhampton Wanderers winger inside the penalty area.

The visitors managed to avoid any nervous moments until the very last minute, when Charlie Adam’s 25-yard volley cannoned back off the West Ham crossbar.

Stoke then had a strong appeal for a penalty turned down in injury time when the ball appeared to strike West Ham defender Guy Demel’s hand inside the visiting penalty area.