White Hart Lane side take the spoils in this crucial North London Derby.

Gareth Bale stole the spotlight yet again as the Tottenham star inspired his side to a crucial 2-1 win over Arsenal that piled on the misery for their north London rivals on Sunday.

Bale has been in sublime form of late and the Wales winger produced a typically clinical finish to break the deadlock in the first half at White Hart Lane before Aaron Lennon doubled Tottenham’s lead just moments later.

Per Mertesacker’s goal early in the second half set the stage for a tense finish, but Andre Villas-Boas’s team, now unbeaten in their last 12 league games, held on to move above Chelsea into third place in the Premier League and within two points of second-placed Manchester City.

Spurs have had eight managers since they last finished above Arsenal in 1995, but Villas-Boas could be the one to end that barren stretch as his side sit seven points clear of fifth placed Arsenal, who face a major struggle just to qualify for the Champions League.

Arsenal’s first defeat in six league games left them five points behind Chelsea in the race for a top-four finish and added to the sense of a club in crisis.

Gunners boss Arsene Wenger had awoken to reports that Arsenal could be the subject of a takeover bid from a Middle East consortium which would place his future under scrutiny after eight years without a trophy and this was another dispiriting afternoon for the Frenchman.

Arsenal, prompted by Jack Wilshere’s intelligent passing, had been first to settle after a frantic opening and Olivier Giroud’s header brought Hugo Lloris into action.

Bale had few chances to flourish while Spurs struggled to find their rhythm in the opening 30 minutes and his only contribution of note was to dodge a banana thrown from the section filled with Arsenal fans.

But Bale is far too dynamic a talent to be subdued for long and in the 36th minute he demonstrated the cool head and lethal finishing that sets him apart from the rest of the Premier League at present.

So much of the pre-match focus had centred on Bale’s remarkable form, with some pundits even mentioning him in the same breath as Lionel Messi and Cristiano Ronaldo, and here was further evidence to support their case.

Timing his run perfectly to meet Gylfi Sigurdsson’s astute pass, Bale burst into the penalty area before flicking a fine finish past Wojciech Szczesny for his 24th goal of the season for club and country and his 10th in his last eight games.

In an instant, Bale had completely transformed the tone of the match. Where Arsenal had been relatively comfortable, they now reverted to the nervous group that has struggled for much of the campaign.

This time it was Scott Parker who delivered the crucial contribution, running unchecked from inside his own half before sliding a perfectly-weighted pass to Lennon, who beat Arsenal’s woeful offside wrap before rounding Szczesny and slotting into the empty net. 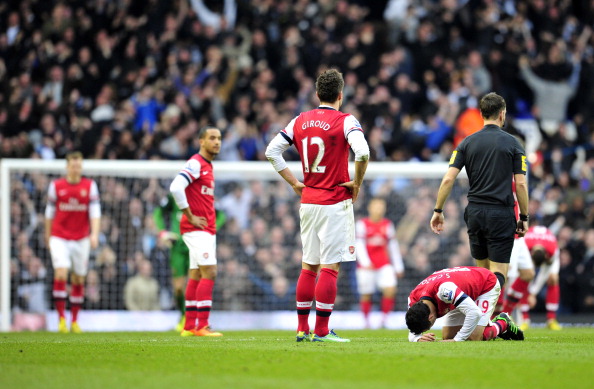 With Spurs rampant at that point, Wenger’s side desperately needed a goal early in the second half to restore their belief and Mertesacker delivered in the 51st minute, the German defender glancing a header into the far corner from Theo Walcott’s cross.

But Bale, scuffing over from Benoit Assou-Ekotto’s cross, wasted a golden chance to restore Tottenham’s two-goal lead before Sigurdsson bizarrely opted not to shoot with only Szczesny to beat.

Ramsey was agonisingly close to equalising in the final minutes, but Spurs survived to ensure the balance of power in north London shifted to White Hart Lane.

Lloris 7 (Comfortable throughout)
Vertonghen 9 (Man of the Match display)
Dawson 7.5 (Never shirked a challenge)
Walker 7 (Average display)
Assou-Ekotto 7 (Some nice touches and a solid outing)
Lennon 7.5 (Composed as he rounded keeper to score, always a danger)
(Gallas)
Parker 6.5 (Got stuck in but at times was bypassed by Arsenal’s midfield)
Bale 7.5 (Scored a goal, missed a sitter but was active throughout)
Sigurdsson 8.5 (Staked his claim for a regular spot in Villas-Boas’s plans)
Adebayor 5 (Poor performance, taken off with an injury)
(Defoe) 6.5 (Didn’t provide all that much once on, fired wide)
Dembele 7.5 (Commanding presence, tidied up well)
(Livermore)

Szczesny 6.5 (At sixes and sevens when having to use his feet to clear)
Mertesacker 6 (Scored a goal but fell asleep on occasion)
Vermaelen 6.5 (A fairly static display)
Monreal 6.5 (Good going forward but slow coming back, out of position at times)
Jenkinson 7 (Attacking display, unlucky to be hauled off on the hour)
(Rosicky) 6.5 (Tried to drive the play on when on as sub, ball didn’t quite run for him though)
Arteta 6 (Ineffective and at times slowed down the pace of the Gunners attack)
(Podolski) 6.5 (More direct and could perhaps have offered more from the start)
Wilshere 5.5 (Unsually anonymous display from the midfielder)
Walcott 6 (At times got into good positions, crossed poorly into the box)
Ramsey 6.5 (Missed a good chance but did okay as a makeshift full-back)
Cazorla 6 (Lacked invention)
Giroud 4 (Was always involved but invariably failed to do anything of note, terrible display)