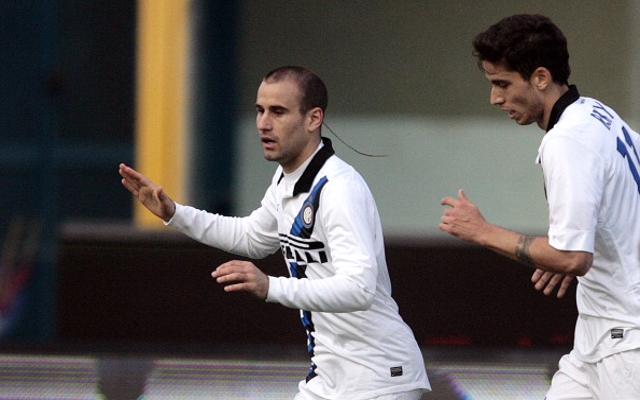 Inter Milan battled back from two goals down to defeat Catania.

Check in to Inter Milan vs Bologna

Rodrigo Palacio came off the bench to score a brace including an injury-time winner in a 3-2 win over feisty Catania to push Inter Milan up to fourth in Italy’s Serie A on Sunday.

Inter are one of several teams vying for the coveted European places, having missed out on the Champions League this season.

But they looked to be heading for yet another setback until Palacio sealed Inter’s 14th win of the campaign with a textbook goal in the second minute of injury time.

Inter started what was always going to be a tricky away fixture in Sicily, where seventh-placed Catania have an impressive home record, without striker Antonio Cassano after his recent bust-up with coach Andrea Stramaccioni.

As expected, the visitors were given short shrift by the Sicilians and were left playing catch-up inside 10 minutes when Gonzalo Bergessio smashed the ball past ‘keeper Samir Handanovic after a defensive blunder by Brazilian defender Juan Jesus.

Inter were in disarray and went in for the half-time break two goals down after Giovanni Marchese doubled the lead with a header at the back post from Francesco Lodi’s free kick.

Palacio and Dejan Stankovic came on at the restart, which was delayed by several minutes as stewards taped the goal support back together.

Catania were unlucky not to score a third when Bergessio saw his shot parried by Handanovic on a one-on-one.

But when Fredy Guarin’s angled drive flashed past the Catania post it signalled the visitors’ comeback.

Minutes later Palacio latched onto Ezequiel Schelotto’s through ball, took it to the byline and sent over a cross for Ricky Alvarez to beat Mariano Andujar from close range with a diving header.

Inter came close again when Guarin’s header flew over but Catania also missed another great chance when Bergessio failed to beat Handanovic from close range, his efforts sparking a scuffle with the big ‘keeper.

Catania were left lamenting that missed opportunity moments later when Palacio, who was unmarked in the box, rose above Alexis Rolin to head home Alvaro Pereira’s cross from close range.

Schelotto spurned two chances to seal the match eight minutes from time when his first shot from close range went straight to Andujar and, after picking up the rebound, his second was also blocked by the ‘keeper.

Catania’s defence were found wanting in the second minute of injury time when Palacio was allowed space on the edge of the area and found fellow Argentine Esteban Cambiasso.

Cambiasso took the ball to the byline and squeezed it to the unmarked Palacio, who beat Andujar with ease from yards out.