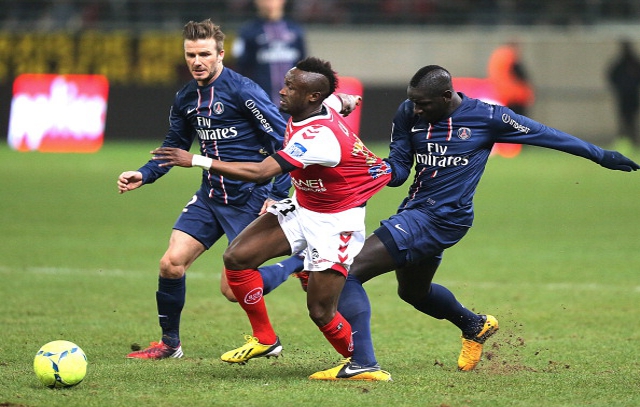 PSG slumped to a shock defeat away at Reims.

Check in to PSG vs AS Nancy

Paris Saint-Germain suffered another shock away defeat on Saturday, going down 1-0 away to struggling Reims despite the hosts having to play with 10 men for the final half an hour.

Polish midfielder Grzegorz Krychowiak was the star for the home side, netting the all-important goal just six minutes after Christopher Glombard had been sent-off.

The introduction of David Beckham for the final 26 minutes could not prevent the capital club slipping to their fifth Ligue 1 defeat this season, and their second in three outings following a 3-2 reverse at Sochaux last month.

Carlo Ancelotti’s side remain three points clear at the top of the table, but Lyon will join them at the summit by beating Brest in Brittany on Sunday.

The result also gives a glimmer of renewed hope to third-placed Marseille, who entertain Troyes on Sunday.

PSG made the short trip to Champagne country fresh from beating bitter rivals Marseille twice in the last week, once in the league and once in the Round of 16 of the French Cup.

Ancelotti made seven changes to his team from the Cup tie, with Javier Pastore, Lucas and Ezequiel Lavezzi among those returning along with the suspension-free Marco Verratti.

His return in central midfield meant that Beckham was back on the bench at kick-off at a packed Stade Auguste-Delaune.

Even with one eye on the second leg of their Champions League last 16 tie against Valencia next Wednesday, PSG should have been strong enough to see off the challenge of a Reims side with just one win in their previous 19 matches in all competitions.

The fact that 22-goal Zlatan Ibrahimovic had scored as many times in Ligue 1 this season as Reims indicated the size of task awaiting the home side, and the Swede was first to try his luck, fizzing in a low strike that Kossi Agassa helds at the second attempt.

Moments later, PSG ‘keeper Salvatore Sirigu had to turn a deflected Antoine Devaux strike from range around the post, but that was a rare moment of respite for the home side.

Lavezzi missed a glorious chance to open the scoring 10 minutes before the interval, slotting wide after finding himself clean through on goal at the end of a quick counterattack.

Agassa then beat away an Ibrahimovic free-kick from 35 yards, before the Swede was denied the opening goal by the assistant referee’s flag three minutes into the second period.

The big centre-forward beautifully volleyed in a long ball from Verratti, only for an incorrect offside decision to deny him his 23rd of the season.

Nevertheless, Reims appeared to be right up against it when Glombard was shown a second yellow card for a foul on Pastore in the 58th minute.

And yet the hosts went on take the lead when Mohamed Fofana headed down a corner for Krychowiak — who had wriggled away from his marker Alex — to convert at the far post fir only his second career goal in the top flight.

Beckham was unable to change the game PSG’s way after that, and Odair Fortes almost made it 2-0 from a winding solo run before Reims hung on through nearly seven minutes from injury time for a vital win.