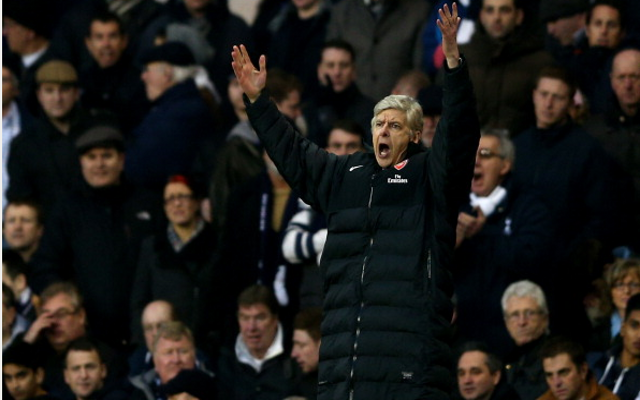 Arsene Wenger has conceded Arsenal could be in danger of failing to qualify for the Champions League for the first time in 16 years after the Gunners crashed to a 2-1 defeat at bitter rivals Tottenham.

Wenger’s side are languishing seven points behind third placed Spurs and five adrift of fourth placed Chelsea as they paid the price for a mad two minutes at White Hart Lane on Sunday.

After making a confident start to a crucial north London derby, Arsenal went into meltdown towards the end of the first half, allowing Gareth Bale to continue his purple patch with a clinical finish before Aaron Lennon burst clear to bag Tottenham’s second goal moments later.

Per Mertesacker reduced the deficit soon after the interval but Arsenal couldn’t find the equaliser despite piling on the pressure in the closing stages.

It was the latest setback in a traumatic season for Wenger, who conceded Arsenal have a serious fight on their hands to finish in the top four.

“It will be difficult to come in the top four now as we dropped points we couldn’t afford to drop,” Wenger said.

“I said before the game we couldn’t drop these points and I stand by that. It’s a massive challenge but it’s still possible to finish fourth so we will fight for it, that’s for sure.”

This has been by far the worst season of Wenger’s 17-year reign in north London, with embarrassing cup defeats to Bradford and Blackburn and a series of lacklustre league displays provoking anger from fans infuriated by the club’s eight-year run without a trophy.

It is especially vexing for Wenger that his players seem to save their most nervous displays for the biggest occasions.

“When you go into a big game like that and are 2-0 down you make it difficult for yourself,” Wenger said.

“It happened to us many times this season and always in big games. I cannot fault the attitude the team produced but you can’t give yourself a mountain to climb every time.

“It’s very frustrating because we lost it when we were on top. We were not efficient in the zones where it matters most at the front and at the back.”

While Wenger, who denied any knowledge of a reported takeover bid from a Middle East consortium, faces up to an uncertain future, Spurs manager Andre Villas-Boas is riding high after a remarkable renaissance in his second spell in English football.

Villas-Boas was sacked by Chelsea almost exactly a year ago after eight miserable months in charge, but he has rehabilitated his reputation in some style at Tottenham.

And the Portuguese coach believes Sunday’s win could serve as a fatal blow to Arsenal’s morale.

“It meant a lot because we wanted to get this one over Arsenal and create a distance between us,” Villas-Boas said.

“It can have a direct effect on Arsenal’s motivation. They are on a downward spiral in terms of results and we are on an upwards spiral. It is extremely difficult to get out of that negative spiral.

“There is a great focus on trying to make this the year we qualify for the Champions League once again. Everyone is bonding together regarding that objective.”