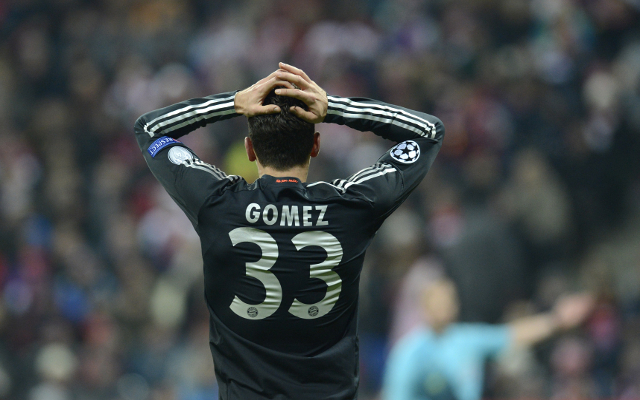 The German international striker has found himself warming the bench following his return from injury but this source still quotes his valuation at €42m (£36m).

The 27 year old striker has seen his starting spot wrestled from his grasp by in-form Croatian Mario Mandzukic who’s 15 goal return from 18 Bundesliga starts has helped Bayern Munich to a commanding lead at the top of the German top tier, leaving Jupp Heyneckes with no choice other than to leave Gomez out of his starting eleven on a regular basis.

Chelsea owner Roman Abramovich could well do with bringing in a ‘Marquee’ signing this summer and a move for Gomez would be a wise, if expensive, one to consider.

Gomez scored 80 goals in 92 appearances over the previous two campaigns and is rightly feared as one of the most consistent forwards in the Bundesliga.

A move to Chelsea would certainly tempt Gomez if he felt that his future at the Allianz Arena was under threat and given that incoming boss Pep Guardiola may also be interested in bringing in a player or two over the summer could further the possibility of a move to Stamford Bridge.

Torres may well be on his way out after hitting another bout of poor form that has seen the Spanish international fail to score in his last 11 Premier League fixtures.