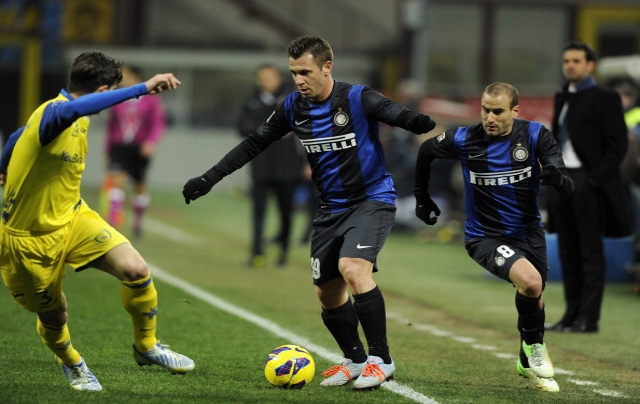 Liverpool will make a move for Inter Milan striker Antonio Cassano if they lose top scorer Luis Suarez to Bayern Munich this summer according to the Metro.

The Anfield side are ready to launch a bid for the experienced Italian international if Suarez is lured to the Allianz Arena, a possibility that could well become a reality if the Merseyside club fail to secure a Champions League berth.

Eccentric San Siro forward Cassano has fallen out with Inter boss Andrea Stramaccioni during a training ground bust-up that saw the frontman dropped from the club’s starting eleven this weekend.

The 30 year old made the contentious move from AC to Inter Milan this summer and has proven a moderate success with the Nerazzurri, scoring eight goals and providing ten assists in 27 starts in all competitions this season.

Cassano is something of a journeyman striker who made his name at Bari and Real Madrid before securing a big move to Real Madrid. However things did not work out well for the talented forward in Spain but he managed to get his career back on track at Sampdoria, where he scored 41 goals in three seasons before moving to AC Milan.

Brendan Rodgers will obviously fight tooth and nail to keep Suarez but the allure of a move to a rampant Bayern Munich side, soon to have Pep Guardiola at the helm, may prove tough to prevent. Therefore moves to bring in an adequate replacement are sensible but one wonders if a player just months off his 31st birthday fits Liverpool’s youthful transfer policy?

Cassano has 35 national team caps during which he has netted ten goals.