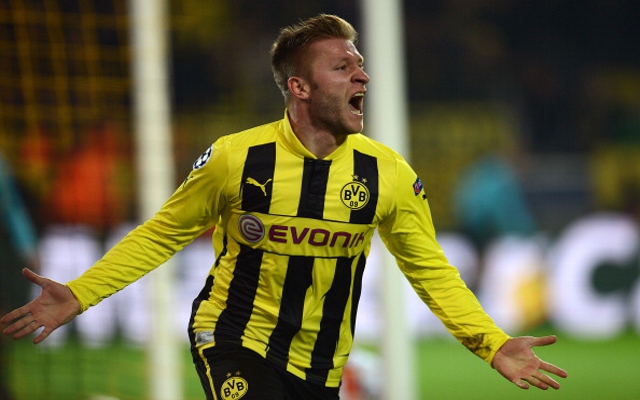 Jurgen Klopp’s side ease past Shakhtar and into the Champions League Quarter-Finals.

Check in to Schalke 04 vs Borussia Dortmund

Borussia Dortmund booked their place in the Champions League’s quarter-finals for the first time in 15 years with a 3-0 win at home to Shakhtar Donetsk in Tuesday’s last 16, second leg tie.

Having drawn 2-2 in Ukraine three weeks ago in the first leg, Borussia go through 5-2 on aggregate as goals by Felipe Santana, Mario Goetze and Jakub ‘Kuba’ Blaszczykowski capped the German champions’ dominant display.

Dortmund are in the last eight for the first time since 1998, when as defending champions they lost in the semi-finals.

On the eve of the match, Shakhtar coach Mircea Lucescu boldly predicted the winner of this tie would reach the final at London’s Wembley on May 25 and Dortmund gave his statement some credibility with an impressive performance.

This was their fourth straight home win in Europe this season at their Signal Iduna Park stadium and their fifth in all.

Germany defender Mats Hummels, who scored the late equaliser in Donetsk, missed his third straight match with flu, but Brazilian centre back Santana proved to be an able deputy.

The hosts started to get the upper hand early on with Goetze and defensive midfielder Ilkay Gundogan at the heart of several attacks when only the final shot was missing for a Dortmund goal.

It came soon enough when Santana’s bullet header on 31 minutes more than made up for his shaky performances in the last two games when he buried Goetze’s cross to claim his first goal since January.

The second followed six minutes later when Goetze added a touch of magic to a Robert Lewandowski cross and used his heel to flick the ball into the far corner, with Donetsk keeper Andriy Pyatov stranded in the middle of his goal, to make it 2-0 at the break.

With their Champions League survival in the balance, Shakhtar came out fighting for the second half with Brazil’s Douglas Costa, on for compatriot Taison on the right wing, and Alex Texeira both going close.

But the game was effectively decided when Blaszczykowski profited after Pyatov parried Gundogan’s fierce drive, but the ball fell at the Poland captain’s feet and he dutifully tucked it away on 59 minutes.

Several Shakhtar defenders slumped on the turf and Pyatov was left prostrate while Dortmund celebrated at the left corner by mobbing the Polish goal-scorer.

To their credit, Donetsk responded by pressing the Dortmund defence.

Borussia captain Roman Weidenfeller had to make a full-stretch save to block a fierce Yaroslav Rakitskiy drive from close range on 77 minutes, while Marco Reus squandered a clear chance at the other end in the final ten minutes.

Dortmund can be joined in the last eight by Bundesliga rivals Schalke 04, who host Galatasaray, and Bayern Munich, who are home to Arsenal, next week.