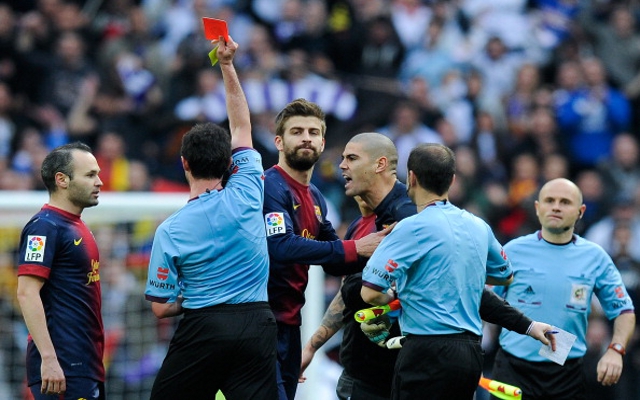 Check in to FC Barcelona vs Deportivo La Coruna

Barcelona keeper Victor Valdes has been handed a four game suspension after being sent-off for remonstrating with referee Miguel Perez Lasa after his side’s 2-1 league defeat against Real Madrid.

Valdes rushed from his goal after the final whistle to confront Perez Lasa after he had not awarded a penalty to the Catalans when Sergio Ramos appeared to have tripped Adriano in stoppage time.

The Spanish international was given a yellow card by the referee for his outburst but continued to argue which pushed the referee into showing a straight red.

The official later stated in his post-match report the Valdes repeatedly shouted ‘you have no shame.’

The club confirmed their intention to appeal the suspension on Wednesday but if the decision is not overturned or reduced, the 31-year-old will miss the next four league games against Deportivo la Coruna, Rayo Vallecano, Mallorca and Celta Vigo.

However, Valdes will be available to play against AC Milan in their crucial Champions League last-16 second-leg next Tuesday at the Nou Camp as they attempt to overturn a 2-0 deficit.