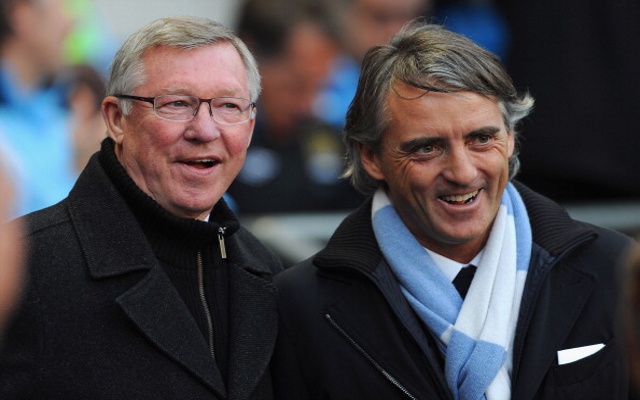 Rooney’s future at United has been thrown into the spotlight after he started the 2-1 Champions League defeat to Real Madrid on the bench.

Alex Ferguson has attempted to draw a line under the situation by insisting that Rooney will be at United next season and he has no issues with the striker.

City were interested in the England forward, 27, when he looked set to leave Old Trafford in 2010.

But Mancini has played down any suggestion that he could renew their pursuit of their neighbours’ striker.

Mancini said: “I don’t know. I don’t know this situation. I can understand Rooney would be upset if he didn’t play but these are things that can happen in every team. After one week is finished

“I think that Rooney is one of the best strikers in Europe but I think it is difficult he can leave Man United.”

Mancini is set to freshen up his striking options this summer following Mario Balotelli’s move to AC Milan in January.

Carlos Tevez will only have one year to run on his contract in the summer and there is also speculation that former Wolfsburg striker Edin Dzeko could return to the Bundesliga with Borussia Dortmund.

The City manager was quoted as saying that Dzeko needs to play on a regular basis, could thrive in Serie A and would cost more than £20 million.

And Mancini has refused to rule out selling the Bosnian, 27, who is City’s top Premier League goal-scorer with 13.

He added: “At the moment, there is nothing. In the end, maybe, I don’t know. In the summer, it could be possible.

“In this moment, there is nothing. We don’t know. Dzeko player is an important player for us. We want that he stays here.”

Argentina striker Sergio Aguero will miss Saturday’s FA Cup quarter-final against Barnsley as a precaution over a knee injury but should be available for the Premier League trip to Everton next weekend.

Captain Vincent Kompany is still not ready to return from a calf injury and could also be back at Goodison Par, while Jack Rodwell will miss several weeks after picking up a hamstring problem in the 1-0 win at Aston Villa.

Mancini believes there is little to be gained by taking a chance on Aguero’s fitness against Championship side Barnsley at the Etihad Stadium.

He said: “I don’t think it is serious but in this moment we can’t take a risk with Sergio. We try to recover him for Everton.”

Mancini accepts that United’s exit from the Champions League will hamper City’s attempts to get back on track in the title race.

The champions currently trail Ferguson’s side by 12 points and Mancini felt that United being tied up with European commitments would have helped his team.

He said: “I think for us it was better they stay in the Champions League. They play every three days an important game, it is more difficult.

“I think it is important to be strong in a difficult moment. When you always win, it is easy. It is important to keep strong when you are in second position like us at this moment. You should try and win every game and take the championship.

“I think we can improve. We have 10 games, we need to work for this. Also it is difficult. I used to play until the last game, I won and lost a championship with seven, eight, nine points more.

“In football, two or three games can change everything. United have won 14 games of the last 16 but if they do two or three draws in a row, it can change.”