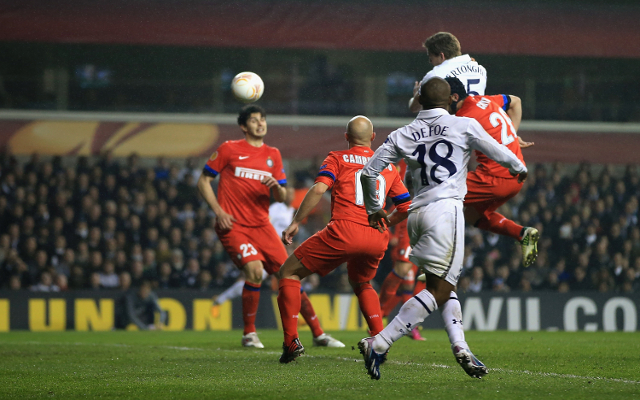 Gareth Bale resumed his torment of Inter Milan by scoring one goal and creating another as Tottenham Hotspur won 3-0 at White Hart Lane on Thursday to place one foot in the Europa League quarter-finals.

Bale, who achieved global fame with a pair of devastating performances against Inter in the Champions League two seasons ago, netted an early opener to take his tally to 10 goals in eight games.

After Gylfi Sigurdsson made it 2-0, Bale set up Jan Vertonghen for Spurs’ third, although by then he had receiving a booking for diving that will prevent him from returning to San Siro, where he scored a famous hat-trick in 2010.

The game was a meeting of third in the Premier League and fourth in Serie A, but Andre Villas-Boas’ side showed their injury-depleted opponents no mercy to take a firm stranglehold on the last-16 tie, which concludes next week.

Tottenham made just three changes to the side that beat North London rivals Arsenal on Sunday, while Inter recalled temperamental striker Antonio Cassano after he was dropped for a training ground row with coach Andrea Stramaccioni.

Spurs’ fans were gloating over Arsenal as the game kicked off and they were given further reason to cheer in the sixth minute, as Bale planted a header inside the right-hand post from Sigurdsson’s cross to put the hosts ahead.

Jermain Defoe tested goalkeeper Samir Handanovic moments later after jinking inside his marker on the edge of the box, before Bale saw yellow for tumbling over Walter Gargano’s leg in the Inter box, ruling him out of the return.

The best Inter could muster was a shot from Mateo Kovacic that narrowly cleared the bar, but Spurs immediately went down the other end and made it 2-0, Sigurdsson bundling home when Handanovic saved from Defoe.

Spurs continued to press, Handanovic tipping over a looping header from Vertonghen, but Ricardo Alvarez spurned a fine chance to reply shortly before the interval, shooting wide when clean through on goal.

At half-time, Inter turned to Rodrigo Palacio, who scored two goals after coming off the bench in a 3-2 win at Catania at the weekend.

There were chances for both sides, Vertonghen volleying a Bale free-kick wide and Alvaro Pereira dragging a shot across goal at the other end, before the Belgian headed in Bale’s corner to put Spurs three goals up in the 52nd minute.

Bale and Defoe both threatened to add a fourth, while Handanovic had to throw himself at the feet of Aaron Lennon, who had stormed into the box from Scott Parker’s pass.

At the other end, Brad Friedel stood up well to deny Palacio, but the game was beyond the visitors and Bale was even able to indulge in a little showboating as the clock ran down.