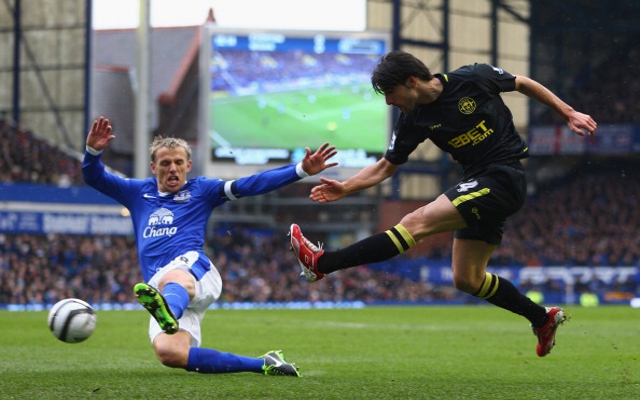 Wigan Athletic shocked Everton with three goals in three minutes to book their place in the FA Cup semi-finals.

Wigan Athletic shocked Everton 3-0 at Goodison Park on Saturday to book a place in the FA Cup semi-finals for the first time in the club’s history.

Roberto Martinez’s side are currently threatened with relegation from the Premier League, while Everton are gunning for a top-four finish, but the Latics upset the form-book with a performance as superb as it was unexpected.

“For us to go to Wembley is a unique, historic moment,” said Wigan manager Martinez.

Wigan chairman Dave Whelan broke his leg while playing for Blackburn Rovers in the 1960 FA Cup final, and Martinez said: “You could sense that in the dressing room – everyone wanted to see the chairman at Wembley.”

Wigan’s three goals arrived within a devastating four-minute spell during the first half.

Shaun Maloney had already hit the post for Wigan by the time Maynor Figueroa broke the deadlock in the 30th minute, climbing to head in Jordi Gomez’s right-wing corner at the back post.

Wigan’s second arrived within a minute and the goal-scorer was childhood Everton fan Callum McManaman, who raced onto a misplaced pass from Phil Neville before beating goalkeeper Jan Mucha.

The onslaught continued and in the 33rd minute Gomez made it 3-0, sweeping home Arouna Kone’s square pass from outside the 18-yard box.

Everton’s fans made their displeasure plain by booing at half-time, while the nearest the home team came to pulling a goal back was a 73rd-minute Kevin Mirallas effort that was ruled out for offside.