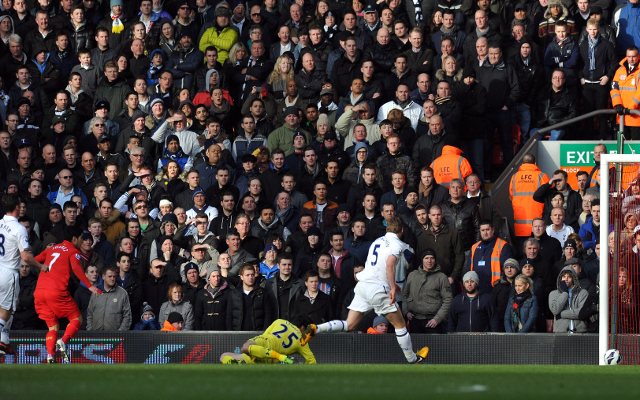 Liverpool edged out Tottenham in a fine five goal thriller at Anfield.

Steven Gerrard put a dent in Tottenham’s bid to qualify for the Champions League as the Liverpool captain’s late penalty clinched a 3-2 win at Anfield on Sunday.

Andre Villas-Boas’s team were on course for a valuable three points when Belgian defender Jan Vertonghen struck twice for the visitors either side of half-time after Luis Suarez gave the Reds a 21st minute lead.

But Stewart Downing capitalised on woeful defending from Spurs right-back Kyle Walker to equalise in the 66th minute.

And England star Gerrard netted the winner from the penalty spot in the 82nd minute after Benoit Assou-Ekott fouled Suarez.

Tottenham remain third, but fourth-placed Chelsea, two points behind, and fifth placed Arsenal both now have a game in hand in the race to finish in the top four.

Brendan Rodgers’ Liverpool climb to sixth place, closing the gap on Chelsea to seven points, and retain an outside chance of qualifying for the Champions League.

Liverpool vs Tottenham 2:2 Downing by UCL2410

Liverpool vs Tottenham 3:2 Gerrard by UCL2410