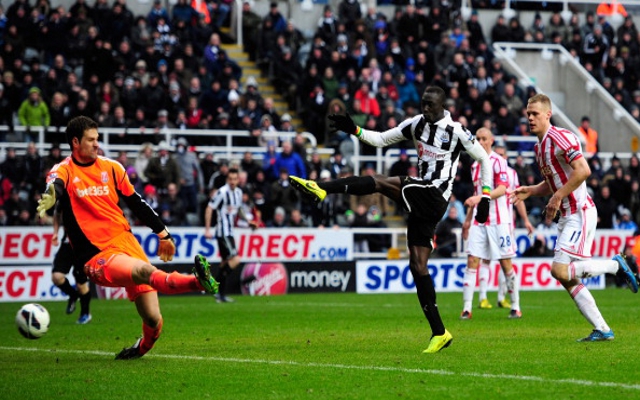 A last gasp Papiss Cisse completed a comeback win for the Magpies.

Check in to Newcastle United vs Anzhi Makhachkala

Senegal striker Papiss Demba Cisse bagged a stoppage-time winner as Newcastle boosted their survival bid with a 2-1 victory over Stoke at St James’ Park on Sunday.

Alan Pardew’s team moved nine points clear of the Premier League relegation zone thanks to Cisse, who struck two minutes into additional time to complete a fine fightback from the Magpies.

After Thursday’s draining 0-0 Europa League draw with Anzhi Makhachkala in Moscow, Pardew’s side could have been forgiven for making a slow start.

Initially, that looked likely as Rob Elliot had to save a third-minute volley by Peter Crouch.

But Pardew’s men started to force their way into the game, with French midfielder Cabaye and then Jonas Gutierrez both sending shots just wide from long-range.

Newcastle should have been ahead when Cabaye’s through-ball took a deflection and fell nicely for Yoan Gouffran, only for the French playmaker to lift his shot over the bar.

A tight second half appeared to turn Stoke’s way in the 67th minute when Newcastle midfielder Cheick Tiote conceded a penalty with a rash challenge on Walters.

Referee Andre Marriner pointed to the spot and Walters, whose recent record from 12 yards has been dreadful, stepped up to blast home the penalty.

However, Tony Pulis’s team were ahead for only five minutes.

Moussa Sissoko was tripped by Glenn Whelan on the edge of the penalty area, prompting a furious reaction from Begovic, who became embroiled in a row with Steven Taylor as the Stoke coaching staff took exception to Pardew’s reaction on the sideline.

Once order had been restored, Cabaye curled the resulting free-kick over the wall and in off the underside of the crossbar to level.

Newcastle pushed hard for a winner after that and they finally shattered Stoke’s resistence when substitute Sylvain Marveaux picked out Cisse in front of goal and he controlled before firing past Begovic.