Life as a professional footballer must be fairly awesome. However it appears life as a FIFA 13 player can also lead to glamour and riches too.

Check in to Tottenham Hotspur vs Fulham

White Hart Lane provided a familiar backdrop as Spurs and England full-back Kyle Walker attended the FIFA Interactive World Cup (FIWC) UK Territory Showdown. The event saw the top four British FIFA 13’ players go head-to-head in the hunt to become FIWC 2013 UK champion and qualify for the Grand Final in Madrid. Walker, not used to watching on from the sidelines also got involved in the action as he suffered a 2-0 defeat at the hands of the newly crowned UK champion George Tsirita.

The FIWC is the world’s largest online gaming tournament, organised by FIFA in association with Presenting Partners EA SPORTS ™ and PlayStation®. Beginning in October, over 200,000 players across Britain have competed against one another online in the FIFA Interactive World Cup to secure a place in the UK Territory Showdown. 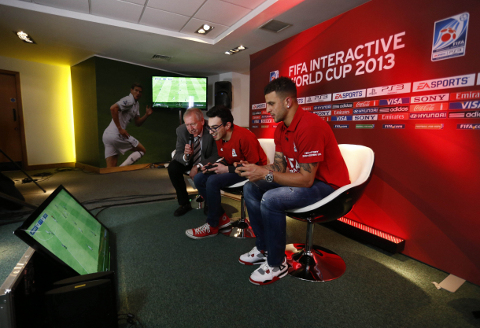 With over 1,600,000 players already registered around the world, George from London becomes only the 13th player to book his place in May’s Grand Final in Madrid after he beat defending UK champion Ty Walton. George will now go on to compete for the chance to become the FIFA Interactive World Cup Champion, $20,000 cash and the unbelievable money can’t buy prize of an invite to the 2014 FIFA Ballon d’Or.

After clinching the UK championship with a 3-2 victory George was then challenged to a game by a confident Kyle Walker, who fancied himself to cause an upset. The match up saw Spurs v Spurs as Kyle held his own until the 38th minute when he took the lead through the man of the moment Gareth Bale. Despite a spirited effort in the second half the gap in quality proved too much as George sealed the victory with a second goal wonder goal from yes you guessed it, Gareth Bale.

George commented, “It’s still sinking in that I’ve actually won, there were some great players here today so I’m delighted to have made it through. The standard will be even higher at the final in Madrid, so I’ll be sure to keep practicing. To top it all I actually got to play against Kyle Walker too, he’s definitely not as good at FIFA 13’ as he is at football though!”

Walker praised George saying, “I’ve really enjoyed the event and it’s great to see how passionate the lads are. Some of the Spurs boys really fancy themselves on FIFA 13’ but I’ll be telling them at training that they are nowhere near as good as these guys. George is unbelievable and I wish him well in the Grand Final”.

Contestants can still participate and compete in this year’s FIWC through the online tournament played on the PLAYSTATION®Network, by registering ‘in-game’ in FIFA ’13 on their PS3. For more information on the FIWC, go to: www.fifa.com/fiwc