Stamford Bridge side keen to add to Spanish contingent.

Chelsea owner Roman Abramovich has set his sights on adding another Spaniard to his Blues squad as the Russian billionaire looks to lure Swansea City forward Michu to Stamford Bridge this summer.

The West London side are in need of attacking reinforcements and have earmarked a move for the former Rayo Vallecano man and are ready to offer up to £16m to tempt the Liberty Stadium side into selling the 26 year old striker.

Such an offer would represent a ten fold profit on the £1.6m the South Wales side spent on Michu and it’s an offer Swansea City chairman Huw Jenkins may feel obligated to consider, such would be the return on the original investment in the in-form marksman.

Abramovich is keen on strengthening his Chelsea squad this summer and appears keen to bring in alternative attacking options with speculation rife that Fernando Torres may leave the Premier League side this summer after failing to come close to living up to the £50m paid to Liverpool for his services. 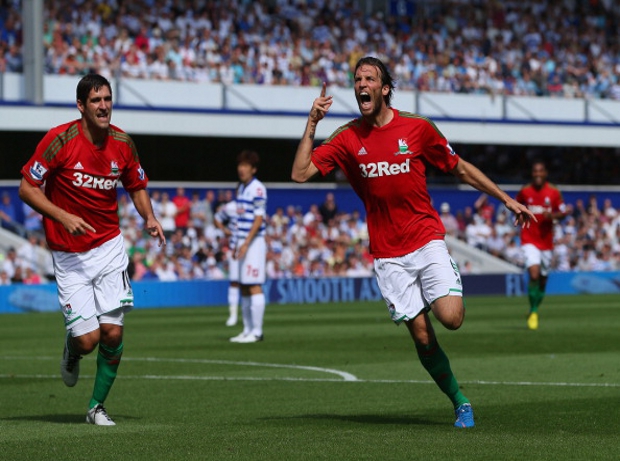 Michu has netted 15 Premier League goals thus far this season and 19 in total and is a player Micheal Laudrup would be loathed to lose. However Swansea City have recently seen a number of their top talents leave, with the likes of Scott Sinclair and Joe Allen being tempted into moves to Man City and Liverpool respectively, so there is every chance that the Oviedo born attacker would be interested in a Chelsea switch.

Abramovich has discussed proposed summer targets with technical director Michael Emanelo and has also sought out advice from interim boss Rafa Benitez and there appears to be agreement on a possible bid for Michu.

Michu is still to collect his first senior national team cap, though Vicente del Bosque has spoken of his intention to offer the Swansea City man a chance to prove himself at international level, clearly a move to Chelsea would only help in that endeavour.