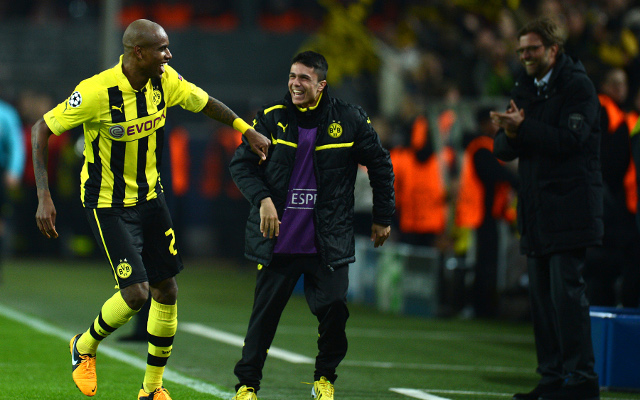 Defender looks set for summer exit from the Bundesliga giants.

Check in to VFB Stuttgart vs Borussia Dortmund

Borussia Dortmund’s Felipe Santana has put a number of top Premier League sides on alert after admitting he is looking to leave the club this summer according to The Daily Express.

The centre-back has become disillusioned with life at the Bundesliga giants after finding his first team opportunities limited.

Santana currently finds himself behind the likes of Mats Hummels and Nevan Subotic in the Dortmund pecking order and is keen to leave the club in his search for first team football.

The player has revealed his preferred destination is the Premier League, which has alerted the likes of Arsenal and Liverpool.

The Gunners are currently considering their options in defence after seeing their current backline commit a number of high profile errors this season.

That has seen them lose valuable ground in the race for a Champions League qualification spot and Arsenal boss Arsene Wenger is keen to avoid a repeat next season.

Liverpool are also thought to be in the market for a defender as they look to prepare for Jamie Carragher’s retirement at the end of the current season. The future of their Slovakian centre-back Martin Skrtel is also uncertain and Anfield boss Brendan Rodgers is keen to ensure his side are not caught out at the back.