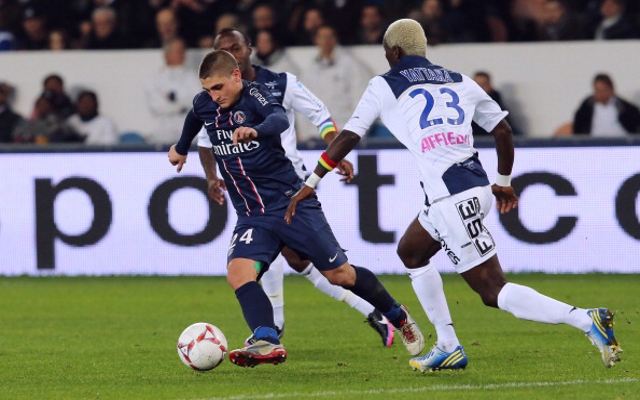 Real Madrid and Manchester United are set for a summer bidding war for PSG’s Marco Verratti according to talkSport.

The Italian midfielder currently plies his trade for Ligue 1 side PSG and has been attracting the attention of a host of top European sides after some impressive displays in the middle of the park for the French club.

The 20 year old is rated as one of the brightest prospects in the game after putting in some accomplished performances for his club in the Champions League this season.

The ease with which Verratti adapted to playing at the highest level as persuaded Europe’s top clubs to prepare a big money move for the player come the summer.

United are also keen to bring the player to Old Trafford as they prepare for life without stalwart midfielders Paul Scholes and Ryan Giggs.

PSG are unlikely to let the player leave without a fight though. The club have slapped a £30 million price tag on the player in the hopes of warding off potential suitors.

The player joined the French giants from Pescara last summer and has since gone on to make three appearances for the Italian national team.