Arsene Wenger is reportedly considering making an approach to re-sign midfielder Mathieu Flamini this summer. The 29 year old is due to see his current AC Milan deal expire this summer and with no sign of the San Siro side offering a new contract the experienced French international will be available on a free transfer at the end of the current campaign.

Though Flamini left the North London side in controversial fashion Wenger is willing to pursue the tough tackler as he looks to strengthen his midfield and may believe that the former Marseille man can provide the bite that is missing from his Gunners squad.

Mathieu Flamini angered many at the Emirates Stadium side when he elected to run down his Arsenal contract ahead of a free transfer move to the Italian giants back in the summer of 2008 but the tigerish competitor has failed to make a consistent impact at AC Milan, struggling to retain a spot in the starting eleven. 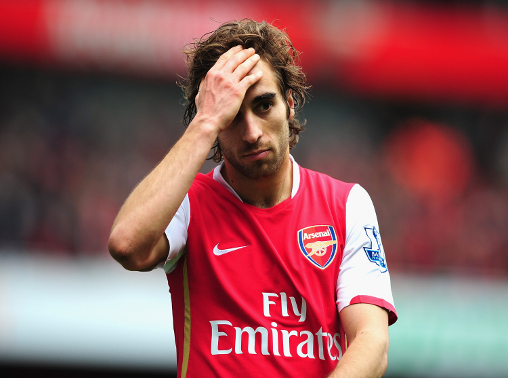 Many had expected Flamini to be axed last summer but he was offered a one year contract extension and has made 15 starts in all competitions thus far this season, proving that he still has a lot to offer.

AC Milan are looking to freshen up their squad, with a view to the long term future of the Rossoneri and as such it appears Flamini will be released in the summer, leaving him free to move on a free transfer deal.

There is said to be interest in the Marseille born player from a number of Ligue 1 sides but interest from Wenger may well tempt Flamini into an Arsenal return.

Wenger could certainly do with a strong midfield presence, having failed to adequately replace Alex Song after the Cameroon international left for Barcelona last August. This has left Mikel Arteta to fill in as a holding midfielder, a move that has failed to prevent the North London club’s midfield from being overrun by the opposition on occasion.

Abou Diaby has continued to struggle with form and injuries despite a bright start to the season and this left Wenger considering a move to welcome back Flamini.

Flamini has made a total of 113 appearances for AC Milan since moving to the club.