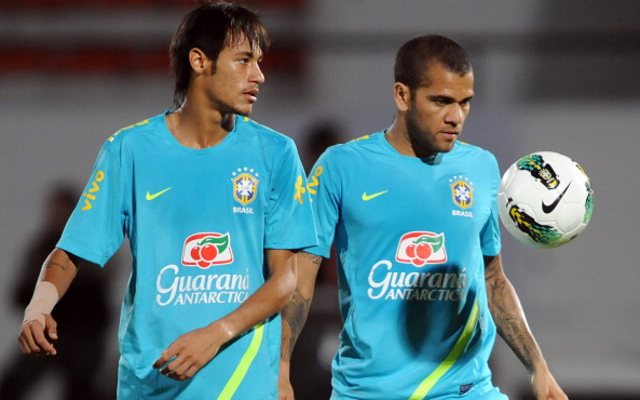 Brazilian right-back believes youngster is ready to make the move to Europe.

Check in to Russia vs Brazil

Brazilian right-back Dani Alves has once again urged Santos striker Neymar to join him at Barcelona according to ESPN.

The pair both joined up together to play for Brazil during their 2-2 draw with Italy where Neymar put in an impressive performance.

The player will have done his hopes of securing a deal to one of Europe’s top clubs no harm as he went on a dribble that almost spanned the length of the entire pitch before setting up Chelsea’s Oscar for Brazil’s second goal.

That has persuaded Alves to reiterate his desire to see Neymar join him at the Nou Camp.

The defender went on to say that he believes Neymar is no longer a hot prospect but is already a player capable of terrorising defences at the highest level.

The likes of PSG, Chelsea and Real Madrid have all been linked with the player in recent months but reports are suggesting that Neymar has signed a pre-contract agreement with Barcelona.

The Catalan giants are concerned though that the youngster could be persuaded to break the agreement.

While Barcelona would then be due compensation, any fee is likely to be covered by the club that persuades him his future lies with them.