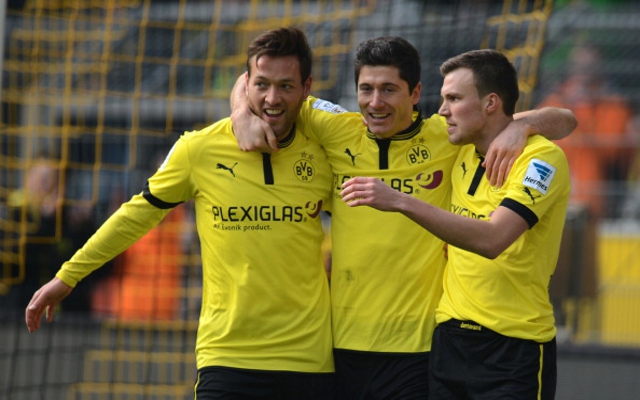 The Polish international looks set to leave the club this summer as his current deal with Dortmund expires at the end of next season.

The German giants are reportedly keen to move the player on now rather than risk losing the player for nothing.

Manchester United were reportedly close to bringing the player to Old Trafford last summer, only for negotiations to be put on hold after Robin Van Persie became available.

The Old Trafford club remain interested in the player however and are set to return for his signature this summer.

Bayern Munich have been touted as their main competitors for the forward, but it is thought that Dortmund would prefer not to sell the player to their Bundesliga rivals.

Bayern have now reportedly turned their attention to other targets which could pave the way for a mega-bucks bid for Liverpool’s Luis Suarez.

That could leave the path clear for Manchester United to secure a deal but the club’s general manager Michael Zorc suggested the club may hang on to the player.

Should a deal go through, one of Wayne Rooney, Chicharito Hernandez or Danny Welbeck are likely to find their stay at Old Trafford come to an end.