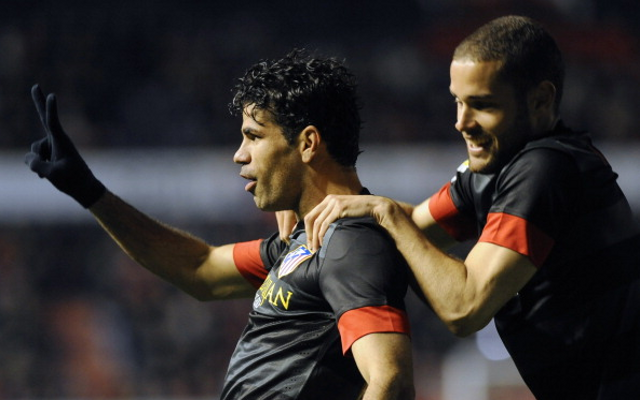 The 24 year old has come to the attention of the North London club after scouting sessions aimed at targeting Adrian Lopez led to an interest in his Vicente Calderon team-mate.

Wenger has been linked with interest in Spanish international Adrian for some months but he is now ready to turn his attentions to Costa, who has hit a good run of form of late.

The powerful forward is into his second spell at Atletico Madrid and has forced his way into Diego Simeone’s first team set-up after an excellent spell out on loan at Rayo Vallecano, during which Costa scored 10 goals in 15 starts and he now supports Radamel Falcao up front.

Costa has scored 15 goals in all competitions this term, form that led to his first national team cap earlier this month.

Arsene Wenger may feel he can tempt Costa into a move to North London given that all talk of a possible Radamel Falcao exit have generally entailed Simeone looking to bring in another big name star to take his place and the Arsenal boss could well offer Costa a better chance of securing regular first team football.

As with other potential Gunners transfer targets the importance of being able to offer Champions League football to prospective additions is of course key, not least because Atletico Madrid are in pole position to secure a berth in the competition after an excellent La Liga campaign.