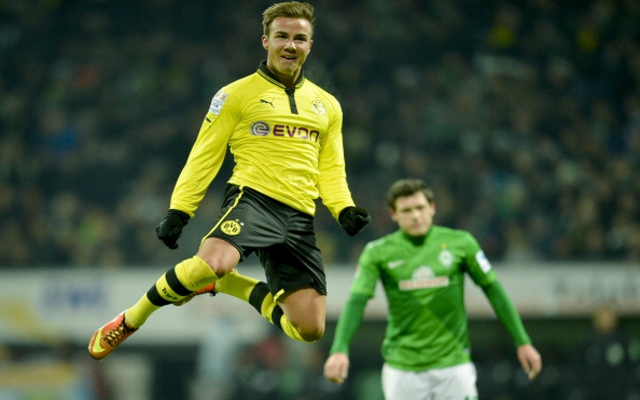 German youngster hints at future away from Bundesliga club.

Borussia Dortmund’s Mario Gotze has admitted he would one day like to play for one of what he considers to be ‘Europe’s top three clubs’ according to Goal.com.

The German midfielder has been in scintillating form for the Bundesliga side this season and has been attracting the attention of a number of top European sides.

But with Dortmund performing strongly both domestically and in the Champions League, it was thought that the player was unlikely to consider a move away from the club.

Manchester United, Real Madrid and Barcelona will have been alerted by the news that Gotze would consider a move.

Gotze is rapidly becoming one of the hottest properties in European football since making his debut for Dortmund in 2009.

The player has gone on to score an impressive twenty goals in eighty appearances for the club.

He led the club to the Bundesliga title last season but Dortmund look unlikely to defend the trophy with their bitter rivals Bayern Munich currently sitting twenty points ahead of them.

The player received his first international cap in November of 2010, coming on as a substitute in the game against Sweden. Gotze has since gone on to appear for the German national team on twenty occasions.