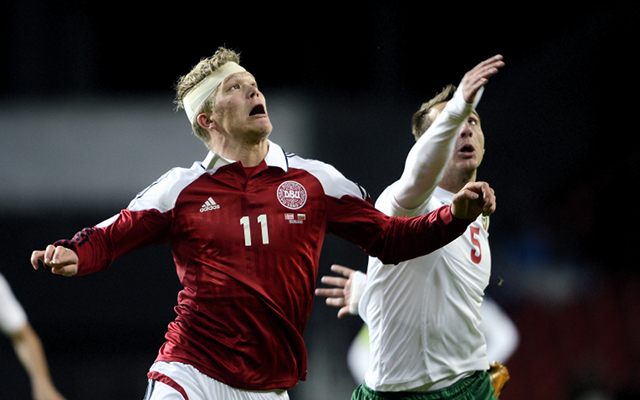 Emirates Stadium side lining up bid for youngster who can’t stop scoring.

Arsenal are lining up a summer swoop for Danish starlet, Andreas Cornelius, according to The Sun.

The highly rated 20-year-old is one of the hottest properties in Europe at the moment having made his breakthrough in to the FC Copenhagen side this term. So far he has bagged 18 goals in 34 games as well as opening his account for the national side last week in a 3-0 win over the Czech Republic.

Quick and powerful, Cornelius is also deadly in the air thanks to his formidable 6’4 frame and it’s thought that the Danish club will face a struggle to keep hold of him for much longer.

However, Arsenal aren’t the only side interested in testing Copenhagen’s resolve as the number of clubs, specifically in the Premier League, grows by the day.

Alongside the Gunners, Stoke, Spurs, Manchester United, Manchester City, Chelsea and Atletico Madrid have all made enquiries or sent  scouts to watch him.

But the player has so far only responded to the interest from Arsenal by saying, “It is a huge pat on the back,” upon hearing of Arsene Wenger’s interest.

Denmark have a long tradition of producing world class players over the years, and though recently that production line has slowed down, they now have three at the same time with Cornelius and Ajax’s Christian Eriksen and Viktor Fischer causing a stir across Europe.