Liverpool are to launch a £12m summer bid for Real Madrid midfielder Xabi Alonso. Anfield boss Brendan Rodgers will receive the backing of his board to pursue the 31 year old despite such a signing not conforming to the club’s youthful transfer policy.

The Merseyside club are under the impression that the former Liverpool player is open to the possibility of returning to the club after it became clear that he was not interested in signing a new Real Madrid deal.

An offer of £12m for a player who will have just one year left to run on his current contract may be one that Real Madrid are ready to consider as they look to conduct something of a squad re-shuffle at the end of the season.

With Jose Mourinho’s future at the Bernabeu up in the air the club’s board are keen to bring in big name additions to help wrestle the La Liga title back from Barcelona, with the Catalan side having pretty much sewn up this year’s domestic championship already. 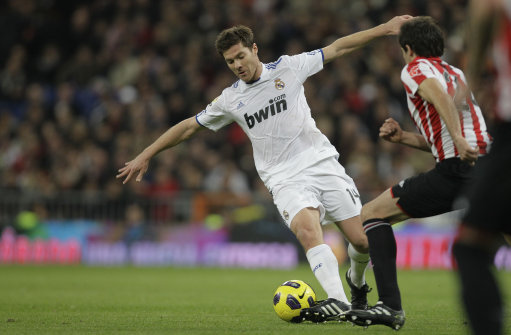 The likes of Kaka, Gonzalo Higuain, Raul Albiol and Karim Benzema are all being linked with a move away from the Spanish giants with ‘Marquee’ signings set to replace them. With the club looking to freshen things up they could well feel the time is right to consider offers for Alonso, especially as the Spaniard has made it clear he does not intend on signing a new deal.

Rodgers is keen to bring in Alonso to add some much needed quality to his midfield with the both Joe Allen and Jordan Henderson failing to impress, fortunately for the Liverpool boss he has been able to rely on Steven Gerrard, with the England veteran experiencing something of a new lease of life over the past 12 months.

Alonso is a cult hero among the Liverpool faithful and the World Cup and double European Championship winner is known to still have a soft spot for the club that helped put him on the footballing map after a successful five year stint at Anfield, during which he won a Champions League triumph in his first term following his move from Real Sociedad.

Liverpool are ready to offer Alonso a three year deal on similar terms to those he currently enjoys at Real Madrid.