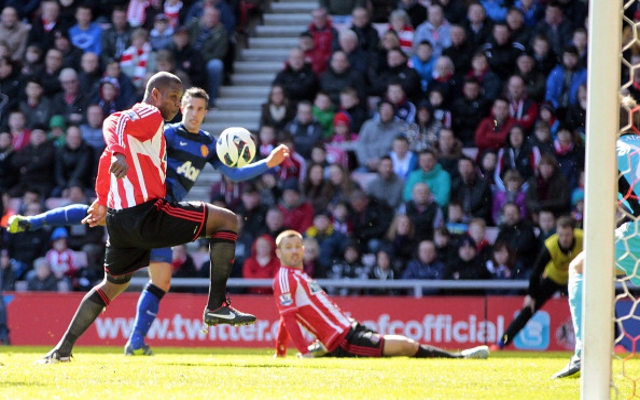 Man United stretched their lead at the top of the Premier League with a relatively comfortable win over a poor Sunderland side.

Manchester United moved a step closer to a 20th English league title with a narrow 1-0 win at Sunderland on Saturday that sent Alex Ferguson’s side 18 points clear of Manchester City.

With an FA Cup quarter-final replay at Chelsea on Monday, Ferguson shuffled his pack by recalling Rafael, Michael Carrick, Antonio Valencia and Shinji Kagawa, while Rio Ferdinand and Wayne Rooney were completely rested.

The visitors took the lead in the 27th minute when Robin van Persie’s drilled cross from the left was inadvertently deflected into the net by Sunderland defender Titus Bramble.

Sunderland rallied in the second period and there was a scare for United when goalkeeper David de Gea clashed heads with captain Nemanja Vidic in the 61st minute.

De Gea needed attention from United’s medical staff but he was able to continue and produced a smart save to prevent Sunderland substitute Connor Wickham from claiming an equaliser in injury time.

Victory was especially sweet for United as Sunderland’s fans had celebrated exuberantly at the Stadium of Light on the final day of last season when United found out they had been pipped to the Premier League title by City.

Defeat left Sunderland four points above the relegation zone in 16th place, although they have played at least a game more than all the teams below them.