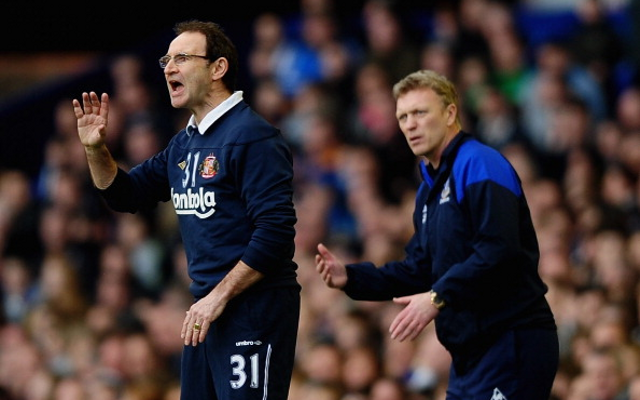 “Sunderland AFC has announced that it has parted company with manager Martin O’Neill this evening,” said a club statement.

“The club would like to place on record its thanks to Martin and wishes him well for the future. An announcement will be made in the coming days regarding a successor.”

The 61-year-old Northern Irishman took in charge at the Stadium of Light in December 2011, taking over from Steve Bruce.

But Saturday’s home loss to United left Sunderland just two places and only one point above the relegation zone.

Sunderland have now gone eight games without a win, picking up just two points in the process.

“There is a determination among the players that we can do it. And I’m as buoyant as I’ve always been,” said O’Neill in the immediate aftermath of the loss.

“Overall, I’m pleased with the performance and I think it bodes well. But there’s always a danger that you’re going to struggle for confidence and self-belief when you haven’t won a long time.”

His record at the club was 21 wins, 20 draws and 25 defeats in his 66 matches in charge, having taken the club to 13th place in the Premier League in his first season.

Bookmakers quickly made Di Matteo the favourite to take over with Hughes the second-favourite.

“Surprised Martin O’Neill has been sacked despite their recent run of results. Starting to get tight at the bottom after Wigan’s win today,” tweeted former England striker Michael Owen.

O’Neill spent the bulk of his playing career at Nottingham Forest, where he won a European Cup winner’s medal in 1980.

As a coach, he managed Wycombe Wanderers, Norwich, Leicester, Celtic and Aston Villa before switching to Sunderland.