Chelsea readying a bid for unhappy Man City midfielder Yaya Toure according to the Daily Express, with the West London side looking to make the most of the apparent breakdown in the relationship between the Etihad Stadium side and the Ivory Coast international.

The 29 year old midfielder issued an ultimatum with regards to his future at the Premier League title holders last week, citing a lack of respect over an ongoing contractual disagreement as the reasoning behind his intention to consider a Man City exit.

This has sparked a raft of rumours about prospective parties seemingly interested in the experienced rangy midfielder, with PSG and Real Madrid said to be Chelsea’s main competition. 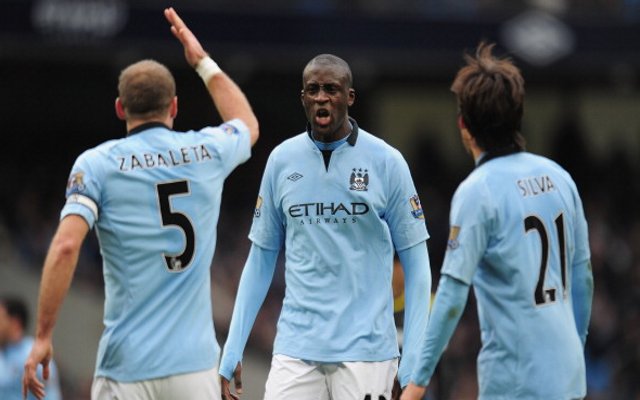 Man City are apparently set for something of an exodus of talent with the likes of Carlos Tevez, Edin Dzeko among the star turns who could leave this summer, however Roberto Mancini would be loathed to lose Yaya Toure, who is arguably the club’s most pivotal player.

Yaya Toure helped Man City to an FA Cup triumph in his first season at the club, scoring the winner in the final victory over Stoke City and subsequently ending a 35 year old wait for a major trophy. In his second term he was one of the star performers who led Mancini’s side to a first domestic title in 44 years.

Roman Abramovich would love to bring in a ‘Marquee’ signing this summer and a move to nab one of the Premier League’s top performers would be a real statement of intent and the combative midfielder could fit in well in the Blues line-up, his brawn and direction potentially a great foil for flair players Oscar, Juan Mata and Eden Hazard.

Toure has made 123 appearances since his move to Man City and has scored 27 goals.