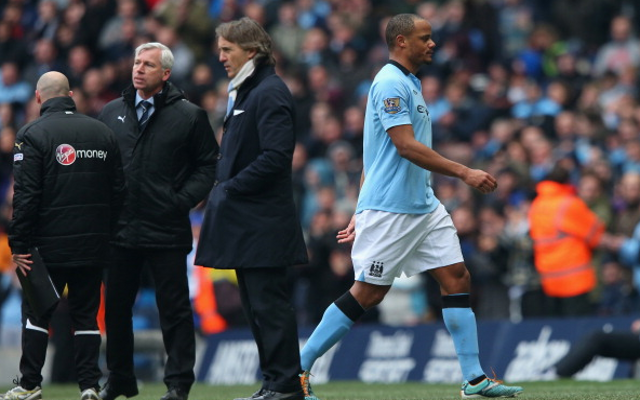 Manchester City face a battle to keep hold of their club captain Vincent Kompany according to The Telegraph.

The Belgian has developed into one of the finest centre-backs in the game and helped lead Manchester City to their first ever Premier League title last season.

City have not managed to repeat those feats this season but Kompany has been one of the few players who has maintained the same level of performance as the previous season.

One of the main reasons City have lost ground to rivals Manchester United in the race for the Premier League title is thought to be Kompany’s absence from the team since January with injury.

But the player’s future could now be in doubt after City boss Roberto Mancini criticised Kompany for appearing in Belgium’s World Cup qualification game against Macedonia.

Belgian media reported that Kompany was unhappy with the public telling off from his manager and was considering his future at the club.

That has put Europe’s top clubs on alert with Barcelona, Real Madrid and Bayern Munich all ready to make a bid for the player.

The last time Kompany was involved in a club-vs-country row was when his former club Hamburg were unhappy with his appearances in the 2008 Olympics. Kompany left the club a month later.