Emirates Stadium side to freshen up attack.

Arsene Wenger has set his sights on two striking talents as he looks to freshen up his Arsenal attack.

The Gunners boss is closing in on a deal to sign Fiorentina forward Stevan Jovetic but has also retained an interest in Atletico Madrid forward Adrian Lopez, who has been made available by the Vicente Calderon side who are keen to offload the Spanish international.

Wenger has been tracking former Deportivo La Coruna man Adrian for some months and is believed to have failed with a bid for the 25 year old in January.

The striker has fallen out with his Atletico Madrid employers over extended contract talks after Adrian looked for an improved deal after a successful first season at the club during which he netted 19 goals in all competitions and helped Diego Simeone’s side to a Europa League triumph. 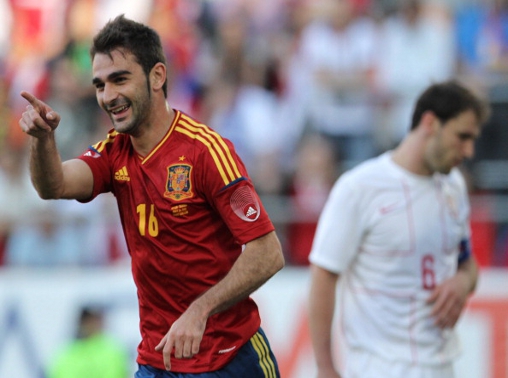 Adrian has since been dropped from the first team set-up, ably replaced by Diego Costa who has offered good support to goal machine Radamel Falcao. This has led to the frustrated striker being handed just ten La Liga starts this term the last of which was some two months ago.

Arsene Wenger is willing to offer up to £7m for Adrian, a fee that Atletico Madrid may well accept given they signed the player on a free transfer and are keen to have his large wage packet wiped off the balance sheet.

Wenger is closing in on Fiorentina forward Jovetic, who is destined to leave his Serie A side with Vincenzo Montella having already signed his replacement Giuseppe Rossi in January. The Montenegro international is said to be keen on a move to the North London club and Arsenal will look to cement the deal early into the summer transfer window.

To help make room for attacking additions Wenger will look is looking to sell Nicklas Bendtner, Park Chu-Young and Marouane Chamakh and was ready to consider offers for Ivory Coast international Gervinho before the forward picked up his form in recent weeks.