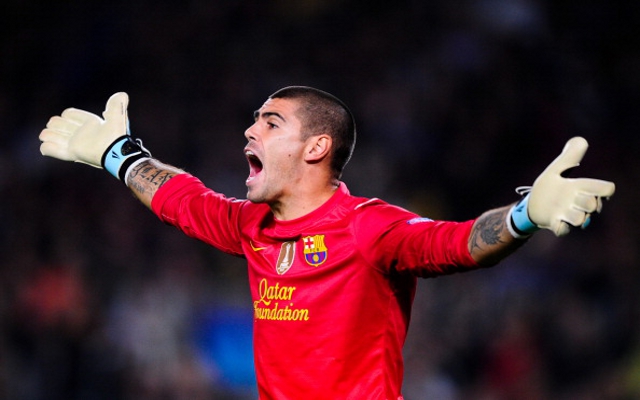 Spanish goalkeeper admits interest in joining the likes of Liverpool or Arsenal.

Check in to FC Barcelona vs RCD Mallorca

Barcelona goalkeeper Victor Valdes has admitted that he is tempted to join a Premier League club according to ESPN.

The Spanish goalkeeper rocked the Catalan giants in recent months when he announced his intention to leave the club.

Valdes is thought to desire a new challenge and has revealed he will not sign an extension to his current deal which expires at the end of next season.

Barcelona are keen to attempt to change Valdes’ mind but should they fail to do so, are likely to sell the player this summer rather than risk losing the player for nothing.

Reports in recent weeks have strongly linked the player with a move to Arsenal or Liverpool.

Arsenal boss Arsene Wenger is keen to bring in some competition for young goalkeeper Wojciech Szczesny. The Polish stopper has committed a number of high profile errors this season and Wenger believes the youngster could benefit from an older mentor.

Liverpool boss Brendan Rodgers is also considering his options in goal, with the future of Pepe Reina uncertain. Reina was once regarded as one of the best goalkeepers in the Premier League but has failed to replicate his past form in the last few seasons. The player remains highly rated in Spain though and has been linked with a possible move to Barcelona as a replacement for Valdes.