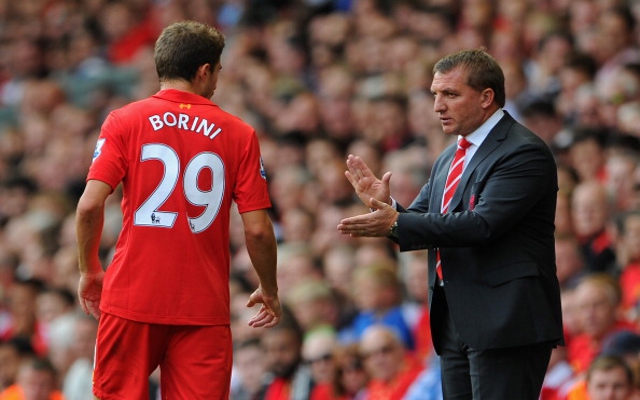 Fabio Borini has no intention of leaving Liverpool this summer according to talkSport.

Reports in recent days had suggested the striker could be set to leave Anfield after just one season with the club.

Italian side Fiorentina were thought to be monitoring the availability of Borini in preparation for a potential exit by their Montenegrin striker Stevan Jovetic.

Borini has suffered a string on injury problems since joining Liverpool from Roma last summer and recently confirmed he would not appear again this season after dislocating his shoulder.

The player has scored just once in 16 appearances for Brendan Rodgers’ side and is likely to find competition for a place in the team increase this summer with England striker Andy Carroll set to return from his season long loan spell with West Ham.

But Borini’s agent, Marco De Marchi, insisted there has been no contact from any interested clubs regarding a potential move.

Marchi expressed his admiration for Fiorentina’s performances this season but insisted Borini remained committed to the Liverpool project.

Borini may find his hand forced though should Rodgers decide to offload the player. The Anfield boss has been told he will be given just £20 million to spend on new signings this summer and may choose to sell Borini to raise additional funds for new players.