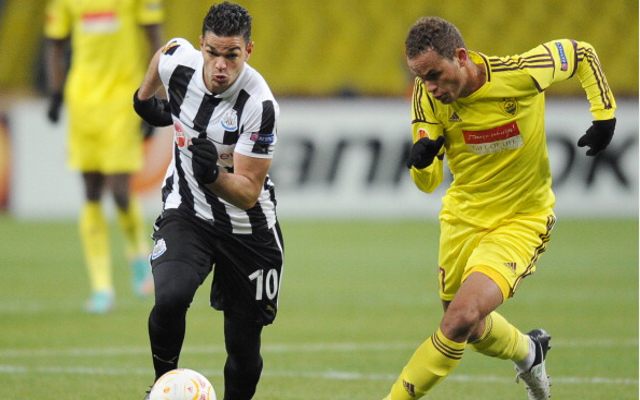 Anfield side hopeful of securing swap deal for French midfielder.

Liverpool are hoping to secure a deal that would see Andy Carroll and Newcastle’s Hatem Ben Arfa swap places according to The Mirror.

Carroll has failed to secure a place in the Liverpool squad since joining the Anfield club from Newcastle for £35 million in January 2011.

The England striker found himself sent out on a season long loan deal to Sam Allardyce’s West Ham after Brendan Rodgers decide Carroll would be unsuitable for his high energy, passing game.

Carroll has performed well for West Ham but has failed to convince them he is worth the £17 million Liverpool are looking for to make the deal permanent.

The striker remains popular at St. James’ Park though and could now return to the club in a deal that would see Hatem Ben Arfa arrive at Anfield.

Rodgers is a firm admirer of Ben Arfa and is keen to add the French midfielder to his squad. But the Anfield boss knows his options are limited after he was informed by the club’s hierarchy that he would have just £20 million spend on new players this summer.

Newcastle are thought to be ready to consider the bid as while Ben Arfa remains highly rated at the club, there are concerns over the player’s ability to stay injury-free.