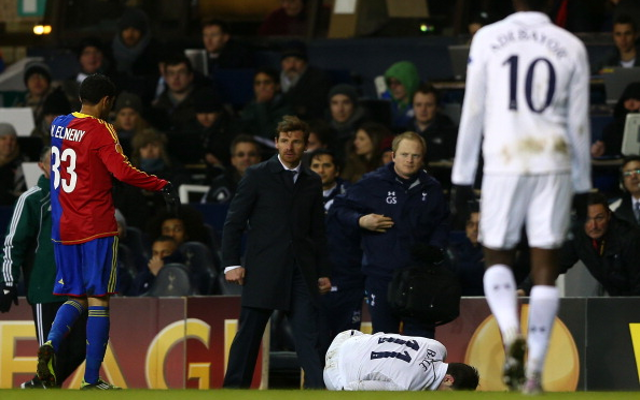 Tottenham winger Gareth Bale was stretchered off with an ankle injury in the dying moments of their tie against FC Basel in the Europa League last night.

Bale, who has been in superb form this season, clutched his leg in agony after being stepped on by David Degen in stoppage-time at White Hart Lane and was eventually carried down the tunnel for further treatment.

“He rolled on his ankle, at the moment there is a lot of pain, but hopefully it’s not as bad as it could have been,” Spurs boss Andre Villas-Boas told BBC Sport.

If Bale, scorer of 27 goals for club and country this term, is sidelined for a lengthy period it would be a huge blow for Tottenham, who are battling to qualifying for next season’s Champions League via a top four finish in the Premier League.

Villas-Boas’s team are currently third and face a crucial clash against Everton on Sunday.

Bale’s injury capped a frustrating evening for Spurs, who had to settle for a draw after falling two goals behind following a poor start against the Swiss champions.