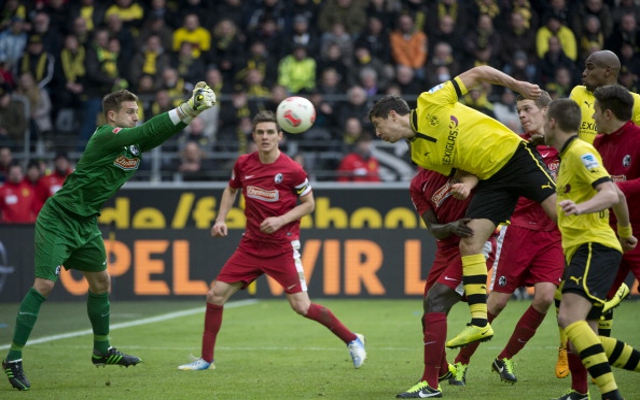 Polish striker given one month to sign a new deal with Bundesliga side.

Check in to Borussia Dortmund vs FC Augsburg

Borussia Dortmund have warned their striker Robert Lewandowksi that he has once month to decide whether he wishes to continue playing for the club according to Tutto Mercato Web.

The Polish striker has been in impressive form for Dortmund and was key part of the team that lifted the Bundesliga trophy last season.

The club have slipped away to Bayern Munich in the league this season but remain in with a chance of winning the Champions League.

Reports in recent months have suggested that Lewandowski could leave the club this summer, with the player’s contract set to expire at the end of next season.

Dortmund would prefer to sell the player during the next transfer window rather than risk losing the player for nothing on a Bosman free transfer.

Manchester United have been strongly linked with a move for Lewandowski. The club almost brought Lewandowski to Old Trafford last summer, only to eventually pull out of a deal when Dutch striker Robin Van Persie became available.

Sir Alex Ferguson remains a firm admirer of the player and is thought to be monitoring the player’s availability in preparation for a summer bid.

German giants Bayern Munich are also thought to be keen on Lewandowski but Dortmund are reluctant to sell the player to their Bundesliga rivals.

Lewandowski’s Dortmund team mates have urged the striker to stay in recent weeks and the club have now issued the player with an ultimatum to sign a new deal or leave the club come the summer.