Real Madrid winger Angel Di Maria is apparently on his way to the Bernabeu exit after failing to put in a consistent run of form this term and this has led to speculation that Man United and PSG are ready to make an offer for the Argentine international according to the Daily Express.

Di Maria was Jose Mourinho’s first Real Madrid signing and after two impressive campaigns the slightly built wide-man has put in a stuttering display in 2012/13. Sir Alex Fergsuon and Carlo Ancelotti are apparently ready to lodge formals bids for the 25 year old. 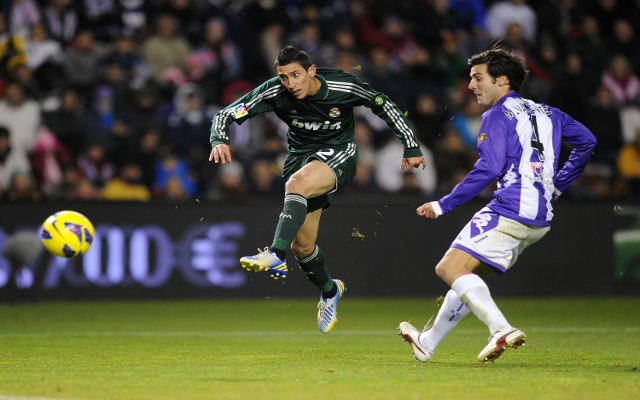 Angel Di Maria has started just 17 of Real Madrid’s 30 La Liga matches and the club’s president Florentino Perez is ready to offload the former Benfica man as part of a squad shake-up which follows something of a disappointing season with the La Liga crown almost certainly on it’s way back to the Nou Camp.

Ferguson could well be in the market for a wide attacking purchase given that Ashley Young and Luis Antonio Valencia have had very average seasons, indeed they are yet to register a single Premier League goal between them.

Nani is seemingly even more likely to make way this summer after spending much of the campaign either on the bench or removed from the Man United squad entirely.

Di Maria would not come cheap though, Real Madrid spent around £30m to sign the attacker and he finished as one of La Liga’s top assist makers in each of his first team seasons at the club.