Anfield return on the cards?

Check in to Reading vs Liverpool

Rafa Benitez is confident he will one day return to manage Liverpool. The current Chelsea interim boss is ‘almost certain’ he will manage Liverpool again according to the Daily Mail.

The Spaniard is set to leave Stamford Bridge in May and is being linked with a myriad of possible posts on completion of his short-term stint at the West London club and clearly has designs on a Liverpool return.

‘I will return, almost certainly,’ Benitez told Marca. ‘What I do not know is when. My daughters and wife still live there.

‘My idea is to train a competitive team. Why not in England? We will have to wait and see. Everything will be worked out.’ 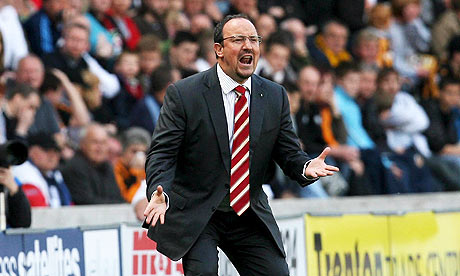 He is still thought of highly by Liverpool’s faithful but it seems unlikely that the club’s American owners would be considering sacking current boss Brendan Rodgers, even though his first season in charge hasn’t proven all that successful.

The Northern Irishman took over from Kenny Dalglish after the Liverpool legend could only achieve an eighth place finish, though did still secure a Europa League berth thanks to a Carling Cup triumph.

Rodgers’ side currently sit seventh spot, some seven points off a Europa League berth and nine off an unlikely top four finish with just six games to play and with five of the six sides ahead of them having a game in hand.

Benitez has had to deal with a great deal of abuse from Blues fans since taking over from Roberto Di Matteo in November but Chelsea are still on course for a top four finish and still in both the FA Cup and Europa League in the latter stages of both competitions.