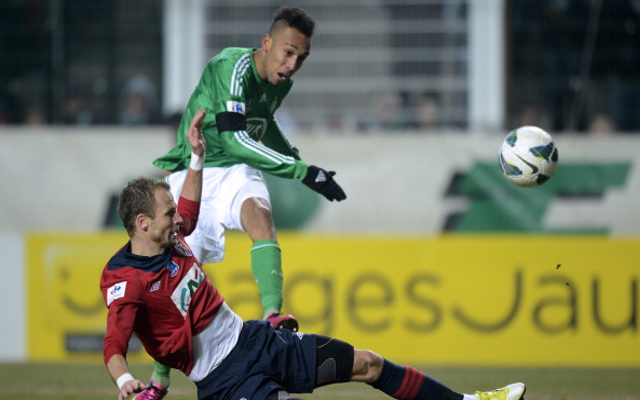 Striker insists nothing has been decided with regards to summer move.

AS Saint Etienne striker insists there is no deal currently in place for him to leave the French club this summer according to Sky Sports.

The Gabon hitman has become one of the most highly sought strikers in Europe after a highly impressive season for the Ligue 1 side.

Aubameyang’s goals have fired St Etienne into contention for a place in next season’s Champions League but the French club know they are unlikely to be able to hold on to the player for much longer with a host of top European sides reportedly chasing his signature.

Aubameyang is aware of the interest and has admitted he could be tempted by a move, with his agent Oscar Damiani confirming a move will take place.

“We have not yet decided if it would be better for him to join an intermediate club or join a big club immediately,” Damiani added however, and it remains to be seen which club he will move to this summer.

Still, he striker has publicly declared his belief that a bid in the region of £10 million could be enough to persuade St Etienne to part ways with the player.

A number of Premier League sides have been linked with Aubameyang including the likes of Arsenal, Chelsea and Newcastle.

But they are likely to face stiff competition for the player’s services as Ligue 1 leaders PSG are keen to persuade Aubameyang to remain in France while reports from Italy suggest that Fiorentina have lined up the striker as a replacement for outbound forward Stevan Jovetic.