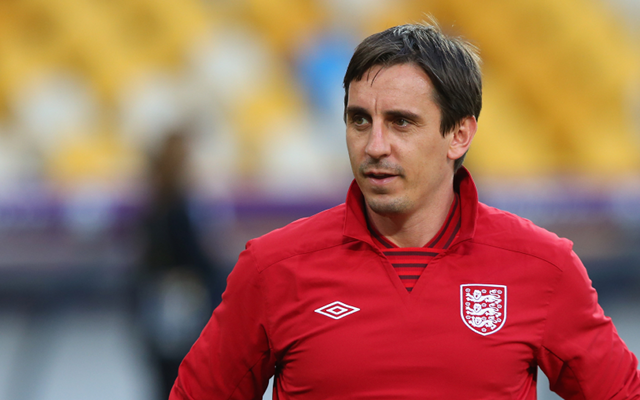 The former Manchester United and England defender has claimed the he has turned down “two-or-three roles” over the past eighteen months, the Daily Telegraph reports.

The 38-year-old, who retired in 2011, has been working as a pundit for Sky Sports and as a coach in Roy Hodgson’s England set up and has insisted that though he is enjoying life at the moment, he will get into management at some point.

“I have been offered two or three roles in the last 18 months but it would not have been the right decision,” he said.

“I see a lot of people rush into coaching too quickly,” he added, “In two years they are finished. There are a lot of crazy owners out there.”

Neville has reportedly already completed his UEFA coaching badges and has been earning rave reviews with his tactical knowledge of the game since joining Sky as a lead pundit. Earlier this season he famously deconstructed Everton’s defence and slammed his own brother’s defending whilst sat alongside David Moyes back in February.

He’s been keen to distance himself from speculation and many believe that he’s doing the right thing in coaching behind someone as experienced as Hodgson before contemplating taking a job of his own.