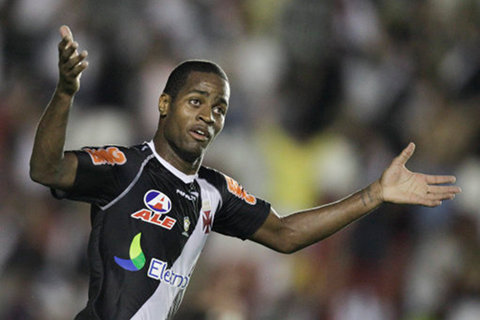 Premier League giants Liverpool and Chelsea are set to go head to head at the end of the season for in-demand Vasco Da Gama defender Dede, says the Daily Express.

The Reds have been keeping close tabs on the 24-year-old for some time now as head coach Brendan Rodgers searches for a long-term replacement for veteran centre-back Jamie Carragher at Anfield next season.

However, the reported interest of the West Londoners is new and could very well scupper the Merseysiders’ hopes of signing the Brazil international on the quiet this summer.

Like Liverpool, the Blues are also looking to replace a veteran one-time England international defender this summer who also happens to be a club legend, and that is captain John Terry, whose contract at Stamford Bridge runs until June 2014.

However, the Uefa Champions League holders are hopeful that qualifying for Europe’s premier club competition next season will give them the edge over their fierce rivals when it comes to persuading the highly-regarded centre back to reject Liverpool in favour of a move to the capital.