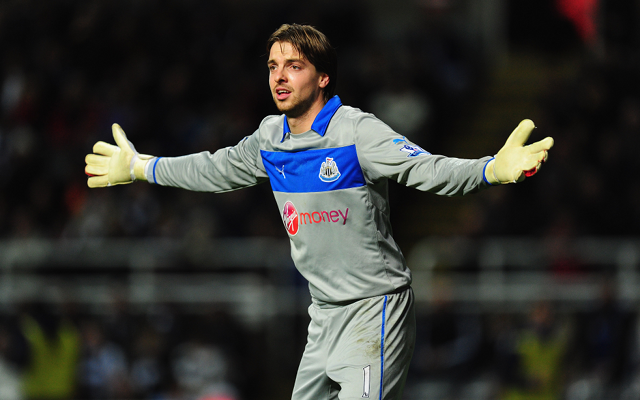 San Siro side keen to bring Dutch stopper to Italy.

Italian giants AC Milan are eyeing up Newcastle goalkeeper Tim Krul according to The Mirror.

The Dutch stopper has been in fine form in recent seasons for the Magpies and is now firmly establishing himself amongst the best goalkeepers in the Premier League.

Those performances have not gone unnoticed and it appears that AC could be set to make a summer move.

The 25 year old remains under contract at St James’ Park until 2017 and Newcastle United are desperate to hold on to the goalie.

But Krul could well be tempted by a move to one of Europe’s biggest sides and the prospect of Champions League football.

Milan have reportedly identified Krul after being knocked back in their attempts to sign QPR goalie Julio Cesar.

The former Inter Milan stopper insisted he could never pull on the shirt of his previous employers’ rivals, forcing AC to look elsewhere.

Krul is younger than Cesar and it is thought the Milan hierarchy are happy to bring the Dutch stopper to the San Siro instead.

Milan currently have Italian goalkeepers Christian Abbiati and Marco Amelia in their first team squad but it seems likely that Krul would become the team’s new number one should he arrive in Italy.