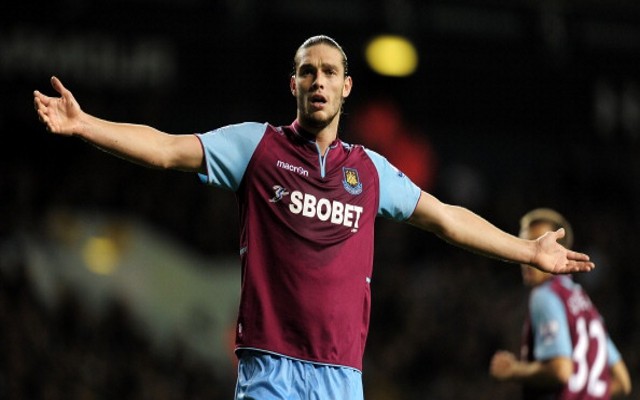 The Portugese attacker latched on to Carroll’s headed knock-down yesterday to open the scoring for his side in the 2-2 draw with Manchester United, and he believes the former Newcastle target man has been a real asset for the Hammers this year.

Liverpool signed Carroll from Newcastle for £35million – a record fee for a British player – but he hasn’t lived up to his hefty transfer fee at Anfield, and is unlikely to feature again under Brendan Rodgers, who favours a passing game with technical players keeping the ball on the floor.

However, the 24-year-old is exactly the kind of player who would work well under West Ham boss Sam Allardyce, though it is not yet clear if they will be able to retain his services beyond his loan spell this season.

Vaz Te believes a permanent move to Upton Park would be beneficial for both him and the team in general, and hopes something can be worked out.

“Since Andy has come here, he has been great for us,” he said.

“He works hard, he holds the ball, he takes the pressure off us — he has been terrific. I call him a ‘beast.’ He’s great in the air and he can play on the floor as well. He has been terrific for us and if we can keep him next year, it would be great.

“Here, we all love him, we all care and we all admire him. We have given him that confidence and he has just flourished. It would be a huge step forward but there are financial issues which are nothing to do with me but every player, the club and the fans, would love to keep him.”

Injuries have restricted Carroll’s game time with West Ham this year, but the England international has still managed six goals in 18 games.