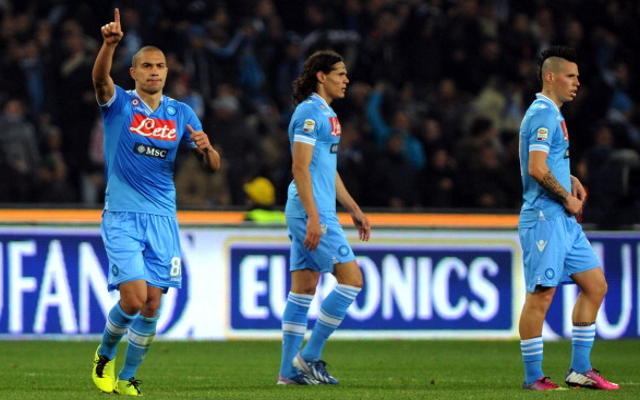 Premier League duo may not lure midfielder away from Naples.

Arsenal and Liverpool have been dealt a small blow in their bid to sign Napoli midfielder Gokhan Inler, who is apparently content to stay at the club.

This news comes despite the Swiss midfielder recently being dropped from the Napoli starting lineup, raising rumours of a rift between him and the coach Walter Mazzari.

According to talkSPORT, the player’s agent Dino Lamberti told Radio Crc that his omission from the team was initially down to an injury and then the manager’s reluctance to change a winning team.

“There has been no disagreement,” he said. “Inler was slightly injured and Mazzarri decided to deploy Blerim Dzemaili instead.

“He has done very well and you shouldn’t change a winning team. Gokhan is now almost fully recovered and I’m sure he will recover his place in the team.

“Gokhan is comfortable in Naples and will not move.”

This will be disappointing news for Arsenal, who have lacked a strong defensive midfielder since selling Alex Song to Barcelona last summer, as well as losing Abou Diaby to continued injury problems. They have been linked with Inler before when he was at Udinese and has carried on his impressive performances since making the switch to Napoli.

Liverpool could also do with reinforcements in that part of the pitch, as the likes of Joe Allen and Jordan Henderson have failed to perform there adequately since moving for big money to Anfield. The Reds are also rumoured to be looking at bringing Real Madrid midfielder Xabi Alonso back to the club.

Arsenal would surely have the edge over their Premier League rivals in this particular transfer, as Liverpool will not be able to offer Inler the Champions League football that Napoli and Arsenal probably will.