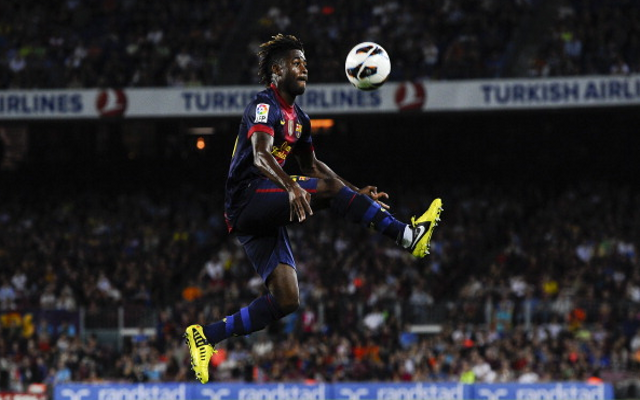 Arsenal boss denies there is a deal in place to bring Song back from Barcelona.

Arsenal manager Arsene Wenger believes his former midfielder Alex Song should persevere at Barcelona, and denies that there is a deal in place to bring the player back after just one season.

The Cameroon international swapped the Emirates Stadium for the Nou Camp last summer, but has found first-team opportunities limited with his new employers.

Somewhat unsurprisingly, Song has found himself behind the pecking order in a midfield containing the likes of Xavi, Andres Iniesta and Cesc Fabregas, and has occasionally played out of position at centre-back for the Catalan giants.

Song had been one of Arsenal’s stand-out performers last season, and rumours have circulated that Wenger may look to re-sign the 25-year-old after just one season with a buy-back clause in his contract at Barca.

However, speaking to Arsenal’s official website, the Frenchman denied these rumours, and gave his backing to Song to succeed at his new club.

“There is no buy-back [clause] in his contract,” he said.

“I heard that he wants to give it a go for another season, which you can understand because it’s the first season.

“I think he’s a quality player and sometimes the players have to persist when it doesn’t go well and not change their mind too soon. My personal advice for him would be to give it another go and after two seasons he can still make a decision.”

Song’s cousin and former Liverpool defender Rigobert has been quoted as saying that his cousin is unhappy with his current role at Barca, prompting links to Manchester City and PSG as well as a return to the Gunners. It’s certainly hard to imagine him forcing his way into that star-studded Barca team any time soon.