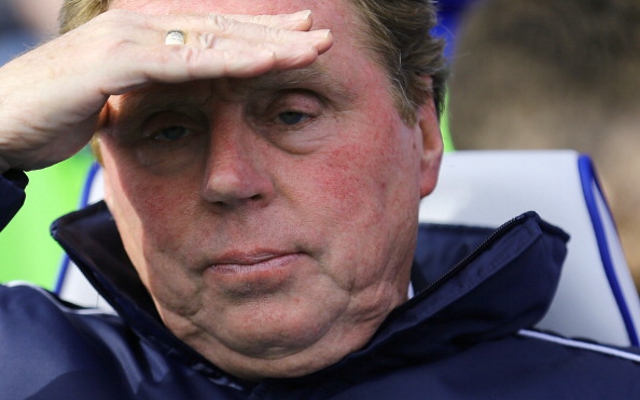 Harry Redknapp does not expect Loftus Road club to survive relegation following their latest defeat.Queens Park Rangers manager Harry Redknapp told talkSPORT that it will now be impossible for his side to avoid relegation from the Premier League this season.

The former Spurs boss was dejected following Rangers’ 2-0 defeat at home to Stoke City, and has all but given up on keeping his side from dropping down into the Championship next season.

However, he still expects full commitment from his players in the final games of this campaign, insisting he does not want to see his side finish bottom of the league.

“It looks impossible now,” he admitted. “But we still want to produce four good performances, absolutely. It’s what we get paid to do and our pride is at stake.

Reading also lost on Saturday, and the two sides are level on points at the bottom of the table, ten points off safety with four games left to play, and Redknapp has already started planning for life in the Championship.

The 66-year-old is expecting a lot of change at the club over the summer, and they are likely to have to offload a number of their big-earners, who will be targets for Premier League teams. Redknapp admitted though that he may be another to leave at the end of the season, if the owners feel they cannot afford to keep him.

“The summer is going to be an important time. You can put a team together you can change the habits of the players that are here.

“You can change lots of things around to come back next year and are ready to go.

“I’m committed to the team, but it’s up to the owners at the end of the day. I wouldn’t be difficult if they said they wanted to go for a cheaper option or want to do something else.”

Redknapp himself may feel like a new challenge, with Championship football quite a step down after playing in Europe and being linked with the England job during his time with Tottenham.