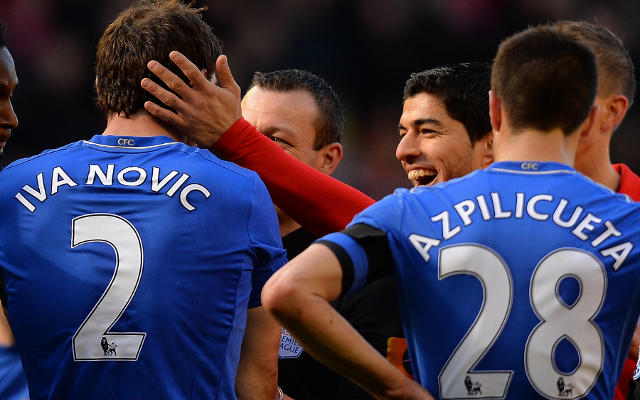 Suarez sunk his teeth into Ivanovic’s right arm during Sunday’s 2-2 draw at Anfield in the Premier League.

The ugly incident has sparked widespread condemnation of Suarez and both the player and Liverpool were forced to apologise, while Reds manager Brendan Rodgers claimed his star striker’s actions were unacceptable.

As referee Kevin Friend missed the incident, Suarez is likely to be punished with a retrospective Football Association suspension, but some critics, including former Liverpool captain Graeme Souness, believe it could be time for the club to cut ties with Suarez as he is damaging their reputation.

However, Barnes, who helped Liverpool win the English title in 1988 and 1990, is convinced Rodgers and Liverpool owner John Henry should stand by Suarez.

“He has to suffer the consequences of his actions, that’s all he has to do,” Barnes told BBC Radio Five Live.

“If you’re saying because of what he’s done he should never play for Liverpool again, who should he play for?

“Whoever signs him, it’s going to reflect badly that they sign a player who Liverpool deem from a moral perspective not good enough.

“So Manchester United, Real Madrid, Barcelona… they can sign him? But we can’t have him? If you’re questioning his moral character, what you’re actually saying is that if he can’t play for Liverpool he can’t play for anyone, which is ridiculous.

“The reflection on Liverpool is their response to the actions and their response is right. The response from (managing director) Ian Ayre and the club is ‘it’s completely unacceptable and we will not accept it’.”

Suarez has a long list of previous misdemeanours even before joining Liverpool from Ajax in January 2011 and it is not the first time he has been in trouble for biting.

In November 2010, he was banned for seven matches and dubbed the ‘Cannibal of Ajax’ after biting PSV Eindhoven’s Otman Bakkal

In December 2011, he was banned for eight matches and fined £40,000 after being found guilty of racially abusing Manchester United defender Patrice Evra.

Then just a few weeks later he received a one-match ban for making an offensive gesture to Fulham fans and in February 2012 he refused to shake hands with Evra when Liverpool faced United at Old Trafford.

Suarez’s latest controversy has forced Liverpool’s managing director Ian Ayre to cancel a trip to Australia and the Far East to deal with the fall-out.