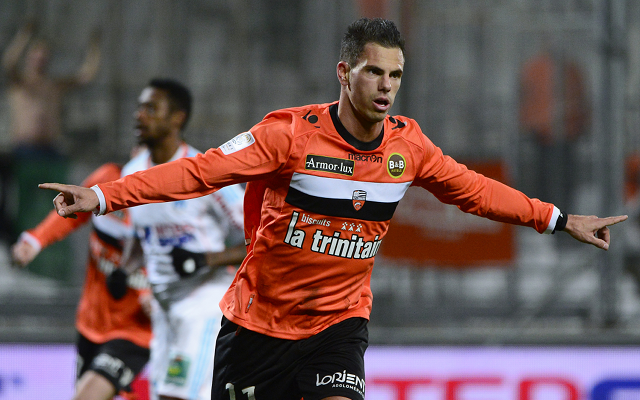 Check in to Lorient vs Marseille

Former Arsenal forward Jeremie Aliadiere has hit out at reports claiming he is moving back to England, Sky Sports reports.

The 30-year-old came through the youth ranks at Arsenal, breaking into the first team in 2001. He could never quite establish himself in Arsene Wenger’s plans, though, and left four years later to endure troubled spells at Celtic, West Ham and Wolves before settling at Middlesbrough in 2007.

Three stop-start years in the Northeast prompted him to return back to France and last season he earned a four year deal with Ligue 1 side, Lorient.

Now, despite his advancing years, he’s enjoying his most prolific season to date, banging in 19 goals in 35 games, helping the club to overcome Saint Etienne last week to secure a place in the French Cup final.

He is finally enjoying his football, recently saying;  “In my whole career, I could never play more than three months in a row. This season I have played 90 minutes during almost all the matches.”

“Back to England? I am talking with my agent and my idea is not to go back there.”

His form this season has even prompted calls for him to be included in the next French national squad, though he feels torn between the nation of his birth and the country of his heritage, Algeria.

“Algeria? I have not refused because I don’t deny my origins, but I have never been to Algeria,” he said, “Les Bleus? I am thinking about it more than before, because I never thought about it. One year ago it was just impossible.

“If playing international football is not possible with the French team then I would like to experience it playing elsewhere.”