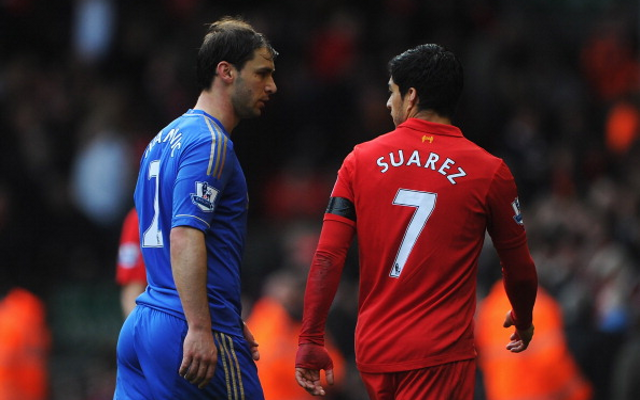 Anfield striker may be banned for the remainder of the current campaign.

Liverpool striker Luis Suarez has been charged with violent conduct by the FA after biting Chelsea defender Branislav Ivanovic.

Suarez sunk his teeth into Ivanovic’s right arm during Sunday’s 2-2 draw at Anfield in the Premier League.

A statement released by the FA explained that the incident can be retrospectively reviewed because it was missed by the match officials and hinted that the Uruguayan faces a lengthy ban.

“It is alleged that the conduct of Suarez constitutes violent conduct and it is The FA’s contention that the standard punishment of three matches that would otherwise apply is clearly insufficient in these circumstances,” the statement read.

Suarez, who has been given until 1700 GMT on Tuesday to respond to the charge, was earlier fined by Liverpool following the incident and asked that the money be donated to the Hillsborough Family Support Group.

The ugly incident has sparked widespread condemnation of Suarez and both the player and Liverpool were forced to apologise, while Reds manager Brendan Rodgers claimed his star forward’s actions were unacceptable.

But Suarez will hope giving the money to the families of the 96 Liverpool fans who died in a terrace crush before an FA Cup semi-final at Hillsborough in 1989 will help calm the storm surrounding Sunday’s events.

Last Monday’s 24th anniversary of the tragedy was marked by a memorial service at Anfield which Suarez and his team-mates attended.

“For my unacceptable behaviour yesterday the club has fined me today,” Suarez wrote on Twitter on Monday.

“I have asked the club to donate the money to the Hillsborough Family Support Group for the inconvenience I have created to the Liverpool fans and to Ivanovic.”

Hillsborough Families Support Group chairman Margaret Aspinall insisted they would accept the donation, but made it clear she didn’t approve of Suarez’s behaviour.

“It is a nice gesture but we can’t say we are grateful because we would rather him not have done that at all,” Aspinall said.

“We could refuse to accept it but it is going to have to go to someone – and he wants to show respect and remorse to the families.”

Meanwhile, some pundits, including former Liverpool captain and manager Graeme Souness, believe it could be time for the club to cut ties with Suarez as he is damaging their reputation.

Suarez’s latest controversy has forced Liverpool’s managing director Ian Ayre to cancel a trip to Australia and the Far East to deal with the fall-out.

But Ayre is adamant Liverpool will not bow to outside pressure to sell Suarez at the end of the season.

“It affects his future in the sense that we have to work with him on his discipline – but Luis is a very important player to the club,” Ayre told Liverpool’s website.

“As we keep saying, he signed a new four-year contract last summer and we’d all love to see him here throughout that contract.

“He’s a fantastic player, top scorer and everything we’d want in a striker, so there’s no change there.

“This is more about getting him back on the right track and it’s largely down to (manager) Brendan (Rodgers) now to work with him on that side of his character.”