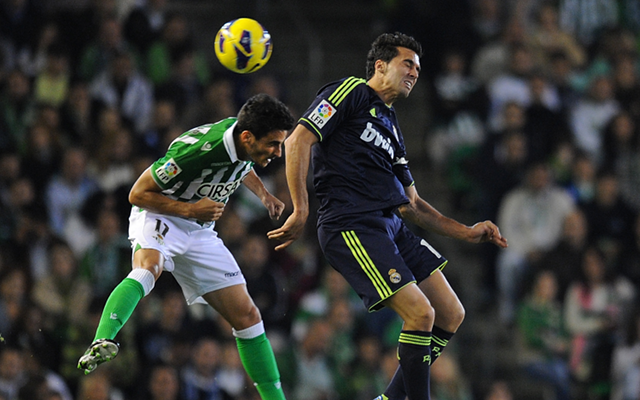 Real Betis set to lose loan ace to Premier League side.Everton are reportedly lining up a summer move for Real Betis loanee Juan Carlos, according to The Express.

The 23-year-old winger is on loan at the Seville based side from Portuguese club Sporting Braga and has emerged as a transfer target for Everton thanks to his fine performances in green and white this season.

Juan Carlos began his career at Real Madrid where he had been a rising star for their B team. However, after just a single appearance for the first team it became apparent that he had no future at the Bernabeau and he was moved on to Braga in 2011.

He has yet to make an appearance for the Portuguese side, though, as he was immediately loaned to Real Zaragoza last season. His performances there prompted Betis to take him on board and he has been a key figure in their good work this term, making 22 appearances.

Everton are facing life without Marouane Fellaini and David Moyes sees the Spaniard as a budget option for adding some of the creativity that they’ll miss when the Belgian departs.

Moyes has been seeking financial reassurance from the Everton board recently to guarantee that he’ll be able to bolster his squad ahead of the new campaign, giving perhaps the clearest indication that he himself with be staying at Goodison Park next season.