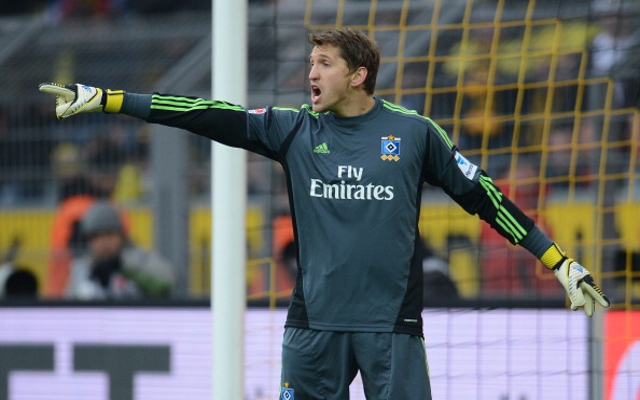 Emirates Stadium side keen on snapping up Bundesliga talent.

Arsenal have switched attention to German international keeper Rene Adler as Arsene Wenger continues to look to bring in a keeper this summer.

The Daily Express believes Arsene Wenger will look to bring in a new starting custodian after seeing Wojciech Szczesny struggle for form this term.

Back-up Lukasz Fabianski has impressed in recent weeks but is apparently not the man the Gunners boss wants to see between the sticks next term, indeed the Pole is out of contract this summer.

A move for Hamburg keeper Adler is down to being priced out of moves for Premier League pair Asmir Begovic and Simon Mignolet, with their respective clubs Stoke City and Sunderland demanding big money offers for their goalies.

Arsene Wenger has also set his sights on wantaway Barcelona star Victor Valdes but if the Nou Camp side are unwilling to allow the Spanish international to leave then the Arsenal boss is ready to make a £5m bid for Adler.

The 28 year old Leipzig born keeper only moved to Hamburg last summer but could perhaps be tempted by the chance of a high profile move to Arsenal, which could help him challenge German first choice keeper Manuel Neuer for Joachim Low’s attention, perhaps all the more relevant with a World Cup on the horizon.

Adler has 11 national team caps and has over 150 Bundesliga appearances to his name.